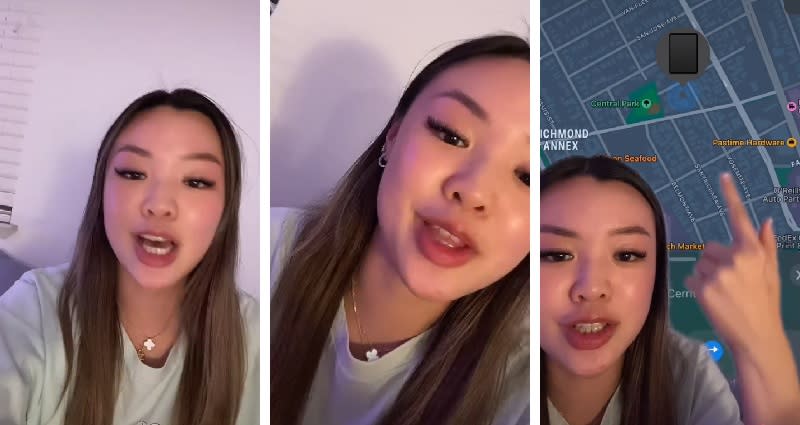 A tourist from Vancouver explained how she tracked down the person who stole her luggage from the trunk of her boyfriend’s parked car last month during a trip to San Francisco.

In a series of TikTok Videos posted on July 13 and July 14, user @kellykwan0 said she and her boyfriend checked out of their hotel in the morning to meet some friends and have lunch at ? Dumpling Home. Kelly said they took their luggage and admitted it was “the first mistake already, we shouldn’t have done that.”

“Then we parked on the street which was our second mistake. In San Francisco you always have to park in a parking garage,” continues the TikTok user. “But it was also the middle of the day and we put everything in the trunk with the lid on so you couldn’t see our stuff.”

The TikTok user said they checked her friend’s car after lunch with their friends and saw that everything was still there. Shortly after, they went to their friend’s apartment, and when they returned to the vehicle, they found that “all their stuff” was gone.

“After visiting my friend’s apartment, we walked back to our car, and when we opened the car doors, we noticed that there were items all over the front seats, such as a pair of face masks and a shirt that didn’t belong to us,” he explained. Kelly, adding that they realized it was really their car when they saw items they had previously purchased in the back of the vehicle.

According to Kelly, her boyfriend went to the trunk to check their belongings and saw that her luggage was gone. Kelly claimed that the robbers “took my two suitcases, his backpack and everything else, but left his shoes behind and gave me a bouquet of roses.”

“Also none of the car windows were smashed so we didn’t even know how they got in the car – so it was either we didn’t lock the car properly or they pry the car door open, we don’t know, Kelly added. After she called 911 to report the incident, the dispatcher suggested she and her boyfriend go to the nearest police station, as that would be faster than waiting for authorities to arrive at the crime scene.

Upon arrival at the station, Kelly said she saw two other victims reporting similar cases to police, with one of them saying their car had been stolen.

Using her iPad’s “Find My” feature, Kelly was reportedly able to locate the location — a six-apartment complex — where their belongings had supposedly been taken, just a 30-minute drive from where they were.

Kelly said she called the police station of the town she believed her belongings were, and police said they could do a civilian standby, where an officer would accompany them as they ask residents about the matter. She explained that the officer should not legally intervene in these kinds of situations.

The police allegedly told them they couldn’t do anything unless they were given a search warrant. That would have required substantial evidence, and Kelly’s “Find My” results would not have been sufficient.

During their search, Kelly noticed that the house opposite the apartment complex had a surveillance camera. She and her boyfriend asked the owner of the house if they could view the CCTV footage, which the owner agreed to.

While it was initially difficult to distinguish the alleged thief’s car from the footage, Kelly said they noticed a car that “fitted perfectly into the timeline of the break-in.” She explained that the car arrived at the apartment complex about 30 minutes after the estimated time of the alleged robbery, and “it took 30 minutes to drive from that location to that address because we were driving ourselves.”

However, according to Kelly, the alleged owner of the car denied having stolen anything during his interrogation. She also shared that she and her boyfriend couldn’t get their belongings back, noting that shortly after her boyfriend knocked on the apartment complex’s doors earlier, her iPad’s “location suddenly turned off.”

Kelly said her boyfriend had lost his work phone and that the incident caused her to lose about $10,000 worth of belongings, including four pairs of shoes, makeup, clothing, skincare, a laptop, an iPad, and a hair dryer.

“I really hope this doesn’t happen to anyone else,” she says at the end of her latest video. Her series of TikTok videos have totaled over 171,500 views to date.