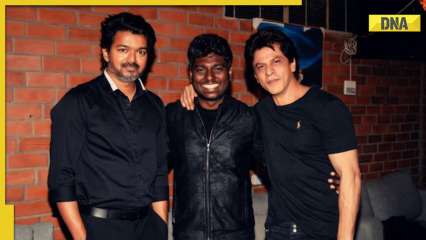 Shah Rukh Khan is known for his generous and gracious nature, and he proved it again by celebrating Atlee’s birthday. The Jawan director is thrilled to see Khan celebrate his birthday. Atlee was even joined by his favorite star Thalapathy Vijay.

Having the pleasure of bringing superstars with him, Atlee quickly captured the moment and shared it on his Twitter. In the photo, SRK looks charming in a black T-shirt and jeans. While Beast star Vijay smiles in his black shirt. Birthday girl Atlee proudly poses with the two icons, beaming in his black jacket. Atlee shared this special moment on his social media, writing: “What more can I ask for on my birthday, the best birthday ever with my pillars. Dear @iamsrk sir & ennoda annae ennoda thalapathy @actorvijay.”

Here is the picture

What more can I ask for on my birthday, the best birthday ever with my pillars. My dear @iamsrk sir & ennoda annae ennoda thalapathy @actorvijay pic.twitter.com/sUdmMrk0hw— athlete (@Atlee_dir) September 22, 2022

Once Atlee shared the photo, it spread like wildfire. Fans of Vijay and SRK celebrate the moment and how. They are going over the top of the moment. One user wrote: “Brooo he is 57 years old. Just wow.” Another user wrote: “Damm threw these two and the records will be smashed to pieces.”

One of the users wrote: “My favorite @ActorVijay Anna & @Iamsrk Sir In Single Frame!” One of the netizens wrote: “King of Bollywood and King of Tollywood.” Another netizen wrote: “A random photo from a birthday party and everything else new on social media today is gone. Absolute SUPERSTARDOM this!! The meeting of the TITANS! #Thalapathy @actorvijay & @iamsrk! #Beast #Varisu ”

ALSO READ  Brahmastra: Ayan Mukerji Reveals How Shah Rukh Khan Got On Board Film, Says 'We Owe Him A Lot'

Earlier in June, Shah Rukh posted about Jawan, saying: “It’s a special RC (Red Chillies) project that has had to wait due to unavoidable problems around us. But some good men have worked hard and made it possible. I want to @ thank _GauravVerma the co-producer, @Atlee_dir and their Jawans for making this dream come to life. Now… Good to go Chief…!” Jawan also stars Nayanthara and Vijay Sethupathi in the primary roles. The film will hit theaters on June 2, 2023.