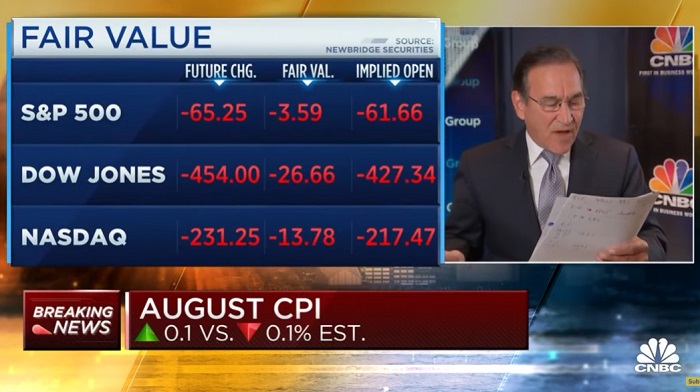 Inflation is still scalding hot despite economists’ projected decline, with the consumer price index (CPI) rising 8.3% from a year ago, up 0.1% from the previous month.

The increase comes even if gas prices have fallen significantly from their peaks during that period.

The 0.1% month-over-month increase, the 0.6% core increase and the 8.3% year-over-year increase all represent higher numbers than had been forecast by experts.

The Hill reports that “economists expected the steady decline in gas prices over the past month to lead to a ‘slight drop’, but prices for food, electricity and a wide variety of (commodities) continued to rise.”

Phew, these are bad inflation numbers for the US.

Consumer price index has not reached its peak

The latest report is a hard blow to a president who signed the mislabeled “Inflation Reduction Act” last month and a government that tried to tell the American people that inflation had peaked.

Commerce Secretary Gina Raimondo was fairly confident that the consumer price index was falling in July, saying inflation “probably” has peaked, but that could change due to factors “out of our control”.

The factors cited were “a new war” and “a new COVID”, neither of which contributed to the August report.

Biden said inflation was at its “peak” in December. pic.twitter.com/oJ7d4TgGsD

Needless to say it hasn’t reached its peak.

“We just got the news that our economy had 0% inflation in July,” she said in a blatantly false statement. “While the price of some things went up, the price of others, such as gasoline, clothing and more, fell.”

We just got the news that our economy had 0% inflation in July. While the price of some things rose, the price of others, such as gasoline, clothing and more, fell.

As usual, the inflation report notes that while gas prices actually fell, the cost of other necessities offset that and then some.

But hey, who needs those little things, right?

The consumer price index has been at or above 5% for 16 consecutive months. Real wages, despite a slight increase in this latest report, have been negative for 17 straight months since Biden passed his “stimulus”.

Former President Barack Obama praised President Biden at a White House appearance a few days ago and told the American people they are “better off” under his administration.

Obama to Biden: ‘The country is better off than when you took office’ pic.twitter.com/riGtTJKVWS

“Joe, it is now America’s good fortune to have you as president,” Obama said.

“Thanks to your decency and thanks to your strength – perhaps especially thanks to your confidence in our democracy and the American people – the country is better off than when you took office, and we should all be very grateful for that,” Obama said proudly.

We all know that inflation is killing Americans financially. Even Democrats. The problem is, they just don’t care that you’re suffering.

A recent poll shows that a Democratic voter base is extremely out of touch with reality, putting inflation 8th on a list of pressing issues behind pet projects like climate change, racial inequality and even “something else.”

President Biden responded to the news that the consumer price index is rising again, saying that “prices in our country have been essentially flat for the past two months” and that it is “welcome news for American families.”

Is it welcome news? To be you happy with the prices you’ve been paying since Biden entered the White House?