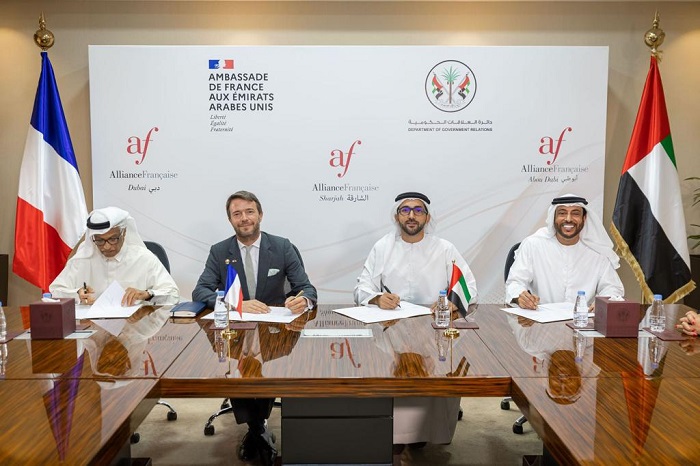 The establishment of the Association is in line with the cultural and civilizational project of the Emirate of Sharjah, which was established by His Highness Sheikh Dr. Sultan bin Muhammad Al Qasimi, Member of the Supreme Council and Ruler of Sharjah.

An accession agreement was signed between the French Embassy and the French Association networks in Abu Dhabi, Dubai and Sharjah, at the department’s headquarters, with the aim of benefiting from the expertise and leadership of the French League Institute in teaching the French language and facilitating communication with it, and supporting the experiences of French-speaking institutes and schools with the latest methods and means of mastery and practice.

The agreement seeks to develop a common professional culture among all parties, enhance Emirati-French relations, especially in the areas of digital technology, entrepreneurship, and raise the level of professionalism of employees by providing consultations, benefiting from mutual experiences and expertise, and following up on joint projects in various sectors.

Sheikh Fahim Al Qasimi said: “We welcome the signing of this agreement with its implications for the depth of Sharjah’s connection with the cities of the French Republic, as aspects of cooperation between us extend to various scientific, cultural, humanitarian and economic fields. The agreement constitutes a natural step in our endeavors to raise these relations to new levels. More advanced”.

He added: “French is the fifth most widely spoken language in the world, and it is the official language in 29 countries, and with the provision of an accredited institute to teach it in Sharjah, we are not only opening new doors to knowledge, science and literature that enrich the cultural scene in Sharjah, but also expand the horizons of attracting More institutes, educational institutions and French schools are coming to the emirate, and with the signing of this agreement, we expect to increase the number of French speakers in Sharjah in the coming years.”

ALSO READ  Head of State: We cherish the historical friendship between the UAE and Britain and their peoples

In turn, Xavier Chatel said that this achievement we are witnessing today is the summation of great efforts that will constitute a starting point for further communication and mutual openness to the French and Emirati cultures.

He added, “We have long and solid cultural relations with Sharjah, which hosted the first French school in the UAE, and has a sophisticated academic structure that is open to other cultures, which paves the way for further cooperation between us in the educational and cultural sector.”
His Excellency Xavier Chatel stressed the close partnership in the publishing sector between Sharjah and France, and the permanent interest in and participation in the Sharjah International Book Fair, as arts and literature, with their diversity, constitute a meeting point between Sharjah and France, which the association will work to advance.

For his part, Hussain Al Jaziri, President of the French League in Dubai, said: “The establishment of the Association in Sharjah is an extension of the great cultural project laid down by His Highness Sheikh Dr. Sultan bin Muhammad Al Qasimi, as Sharjah was the first emirate to teach French to preparatory students in the sixties of the century. The past, as it was a pioneer in establishing the relationship with the Francophone culture.”

In turn, the head of the “French League” in Abu Dhabi, Sultan Al-Hajji, said: “I thank Sharjah and the organizers of this agreement for their efforts that culminated in forming the network of the French League in the Emirates, which will give a strong impetus to cultural relations between the UAE and France.”

The Department of Governmental Relations in Sharjah seeks, through the establishment of the institute in the emirate, to provide an opportunity to learn the French language, learn about the symbols of Francophone culture and its writers, and enrich the cultural and civilizational scene that is characterized by Sharjah with the masterpieces of French literature and its musical and theatrical arts. As learning languages ​​is the first bridge to learn about the cultures and civilizations of nations.