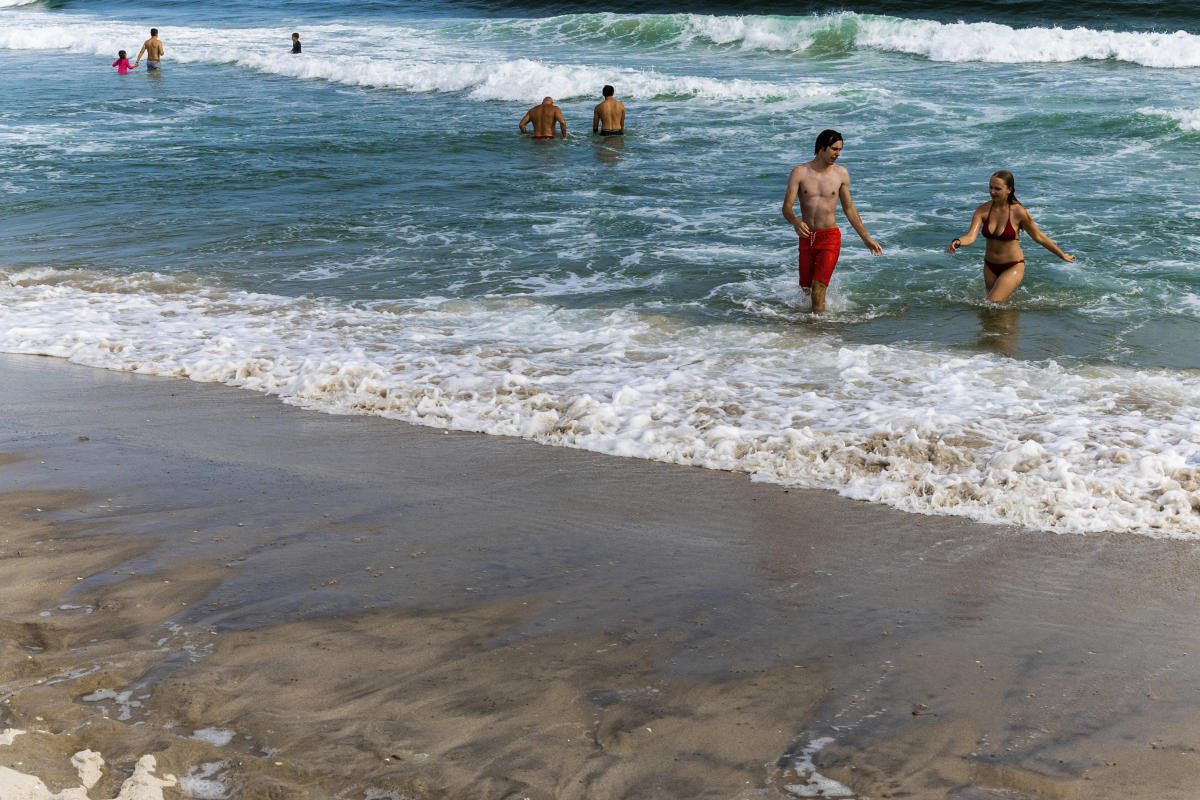 BABYLON, NY (TBEN) — As swimmers cooled off in the Atlantic surf on New York’s Fire Island last Wednesday, Reily Winston held up a smooth-tailed dogfish his friend had just caught fishing off a pier in a cove behind the beach. He rocked the bloodied shark in his hands for a moment before releasing it back into the ocean.

Sharks are seen more often along Long Island’s shores this summer — and not just the mostly harmless, abundant dogfish.

Since June, there have been at least five verified encounters of sharks biting swimmers and surfers. While there were no fatalities, sightings caused officials to temporarily close some beaches for swimming, from Rockaway Beach in New York City to Smith Point County Park in Long Island, where a surfer hit a shark on the snout after he cut his calf. had bitten.

Sharks are not new to New York waters. Sand tiger, sandbar, and dusky sharks are some of the most common species found near shore. But in the past century or so, New York State had documented just 13 shark attacks.

Experts say sharks don’t plan to feed on humans, but instead prey on bunker fish near beaches. According to Gorman, recent shark bites are likely mistakes.

“We think it has to do with the menhaden fish, because the bunker fish is close to shore and the sharks are just making a mistake,” he said.

Swimmers can also interact with sharks as they feed.

“If there’s a food source close to shore, they’ll come close to shore to feed on it,” said Frank Quevedo, executive director of the South Fork Natural History Museum. “When people are in the water, they can interfere with or get in the way of shark feeding.”

Factors contributing to the spike in shark sightings include improving water quality and thriving bunker fish populations due to conservation efforts. Quevedo noted that in 2019 New York passed legislation to protect the Atlantic menhaden, the main food source for many species such as dolphins, whales, tuna, seals, striped bass and sharks.

“This is all a positive sign that the marine ecosystem is healthy,” Chris Scott, supervising marine biologist for the Department of Environmental Conservation, said at a news conference Monday. “And it’s important because sharks are a cornerstone that regulates species diversity, abundance, distribution and marine habitat.”

Conservation efforts have also led to an uptick in shark populations elsewhere in the northeastern US. In New England, a major increase in the seal population has led to a spate of great white shark visits — and the occasional serious attack. Sharks have been killing people on Cape Cod in Massachusetts and in Maine in recent years.

The risk of being attacked by a shark remains very low – much lower than dangers such as drowning. But in response to the shark sightings, New York Governor Kathy Hochul ordered government agencies to step up shark surveillance. Government agencies have added lifeguards and deployed helicopters, drones and boats to monitor sharks along the coast.

Officials say they’re still seeing a steady rise in people coming to Long Island’s beaches, and shark sightings haven’t stopped some beachgoers from getting in the water — though they may not venture that far.

“Sometimes I’m on the edge, like I don’t want to go deep, otherwise I stay on the shallow side,” Hilton said. “I just make sure I’m with the lifeguards and I’m okay.”

During a boat patrol hundreds of feet from Long Island beaches on Wednesday, The The Bharat Express News saw no sharks, but dolphins. Lieutenant Sean Reilly, who is responsible for environmental conservation at the DEC, says he has not seen any sharks from the boat during recent patrols. It’s the lifeguards who encounter sharks off the coast, Reilly said. Dolphins are much more common on patrols than sharks.

“When I started 20 years ago, we saw the occasional dolphin,” Reilly said. “Every time we go into the ocean, we seem to see multiple schools of dolphins.”

During the patrol, a radio alert came in reporting shark sightings near Fire Island.

“That’s where the most sharks are seen, by people who actually catch them because they’re usually not on the surface,” he said.

Scott said he should avoid risky interactions with sharks, avoid swimming in murky waters and areas with schools of menhaden and seals in the water because sharks can feed. Do not swim at dusk, dawn and night, when sharks eat the most. Swim in groups so sharks don’t mistakenly identify humans as prey.

“If people go to the beach…they are more likely to have a car accident on their way to the beach than to actually see or interact with a shark while on the beach,” Quevedo says. . “So my two cents here is to be careful.”

Learning from failures: how Biden scored the win on climate plan