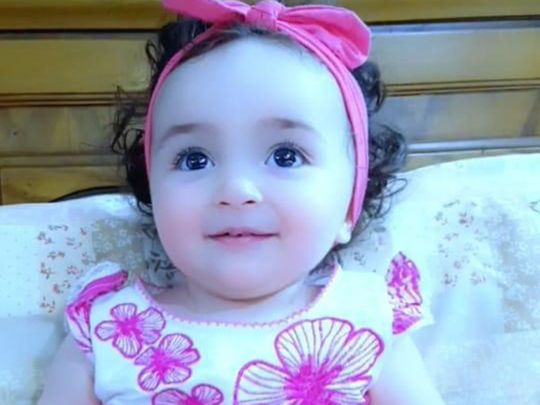 Dubai: A 19-month-old Iraqi girl has been given a second chance at life, thanks to the generous intervention of His Highness Sheikh Mohammed bin Rashid Al Maktoum, Vice President and Prime Minister of the United Arab Emirates and Ruler of Dubai.

The most expensive gene therapy in the world

The compassionate gesture will provide the little girl with a complete reversal of her genetic disease with what is the most expensive gene therapy in the world, worth 8 million dirhams.

The toddler, Laveen Jabbar Al Kutyashi, was diagnosed with stage II spinal muscular dystrophy (SMA), a genetic condition that delays motor development. His condition would have gradually deteriorated without this single injection which can cure his SMA and reverse the symptoms so far.

The parents of the little child cannot thank Sheikh Mohammed enough for covering the cost of treating their beloved daughter. Shaikh Mohammad was moved by the child’s plight when he watched a video posted by Laveen’s mother on social media asking for help.

Dr Mohammad Al Awadhi, CEO of Al Jalila Specialized Children’s Hospital, told Gulf News: “Lucky for the child, when the family came from Iraq as led by His Highness Sheikh Mohammed, she was diagnosed. in our center of excellence for genomic studies. suffer from this genetic disease. Al Jalila Children’s Specialty Hospital is the first and only hospital in the entire region to offer this remarkable gene therapy for SMA.

Dr Awadhi continued, “The gene therapy treatment for this disease was only approved by the US FDA three years ago and is actually a single injection. Processing will take place in a few days. The child will receive an infusion of the medicine Zolgensma (AVXS-101) depending on his body weight. The earlier this medication is given the better because it stops muscle degeneration. In this case, the little girl was recently diagnosed, so the prognosis for her is very good.

Once the drug is administered, the child will be followed by pediatricians and will also undergo a rehabilitation program. The doctors who treat her hope for a full recovery.

Laveen’s parents, Ibrahim Jabbar Mohammad and Masar Mondal, believe that their faith in humanity has been restored by this magnanimous gesture of His Highness Sheikh Mohmmed. “When I got a call from Al Jalila Hospital, my wife and I couldn’t believe the ruler of Dubai would give us such a gesture. You cannot imagine our happiness and the hope it gave us. Without it, we would have lost our baby.

Mohammad, 35, a sales manager in Iraq, and his wife, Mondal, also 35, are the parents of another six-year-old girl. “When Laveen was born, she was perfectly fine and had normal movements. However, by the age of six months her movements had stopped and we were worried. Iraqi doctors suspected stage II SMA. However, it was not diagnosed until October 2019, when we were able to travel to Turkey after the pandemic lockdown was lifted. The genetic tests carried out there confirmed our worst fears and we were in great despair. My wife made this desperate cry for help on social media and imagine our surprise, when such a powerful leader made this gesture to help us. My daughter has a new life, thanks to the generosity of Sheikh Mohmmed.

Most of the nerve cells that control muscles are located in the spinal cord, which explains the word spinal in the name of the disease. SMA is muscular because its main effect is on the muscles, which do not receive signals from these nerve cells. Atrophy is the medical term for getting smaller, which usually happens to muscles when nerve cells don’t stimulate them.

SMA involves the loss of nerve cells called motor neurons in the spinal cord and the disease falls under the category of motor neuron disease.

The Bharat Express News - February 28, 2021 0
<!-- -->"In the future, there will be no BJP or TMC, only the great alliance will remain": Adhir ChowdhuryCalcutta: Congress leader Adhir Ranjan Chowdhury...