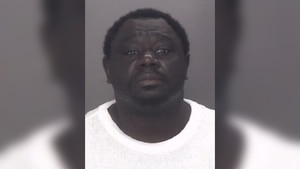 The Robeson County Sheriff’s Office says a 46-year-old man who was paroled on a murder charge is now in custody after four people were shot Tuesday outside Red Springs, according to our partners at WTVD.

Three of the victims were killed and a fourth victim was hospitalized with life-threatening injuries, WTVD reported. The shooting took place Tuesday afternoon near Samuel Drive in Red Springs, northeast of Lumberton.

ALSO READ  'The Goonies' home in Astoria, Oregon sells for $1.65 million to fan

According to Robeson County Sheriff Burnis Wilkins, Corey Leak has been arrested and faces charges including first degree murder and attempted murder.

According to court documents, Leak was convicted of murder in 1996 and sentenced to life in prison. He was released from prison in October 2020 and was on active parole.

During a news conference Wednesday morning, the sheriff’s office played part of the 911 call following the shooting. One person is heard screaming frantically before telling the dispatcher what happened. During the conference, much of the conversation was difficult to understand.

ALSO READ  Practicing yoga with puppies in NYC this weekend

Wilkins said Leak was captured thanks to a witness who saw Leak following a post on the sheriff’s office social media pages.

At the press conference, Wilkins said the crime “basically took a family away.” A woman and two men were killed. The deceased victims were identified as Donald Williams, Sierra Nicole Wherry and James Elijah Beauregard. The fourth victim was identified as Equilla Biggs-Williams.

Wilkins said the suspect was a relative of Biggs-Williams and she had Leak stay at their house to keep him from becoming homeless.

Photos: Communities across the country react to the release of the Tire Nichols police video

The Bharat Express News - January 28, 2023 0
Prosecutor gives press conference after 5 Memphis officers are charged in the death of Tire Nichols Sign up for our Evening Headlines email for...

Photos: Communities across the country react to the release of the...