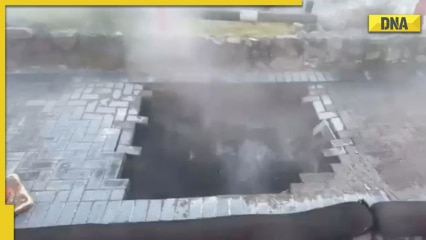 A woman was nearly killed and suffered severe burns after falling into a huge sinkhole filled with boiling water that opened unexpectedly in New Zealand.

The elderly woman was walking through the tourist area of ​​Rotorua when the ground ‘opened’ under her feet.

The sinkhole, which was about two square meters on the surface and about a meter deep, opened just after 2:15 p.m. Thursday in a footpath at the entrance to Whakarewarewa Village in Rotorua.

It was of a type known as a fumarole, an opening in the Earth’s surface that releases steam or other hot gases.

Chief executive Mike Gibbons acknowledged the efforts of village staff, who were on the scene as first aid.

“Whakarewarewa Village is our home. When we welcome visitors to our home and land, we are their kaitiaki (protector or guardian),” he said.

Police have now closed off the footpath near the sinkhole to prevent additional elderly or dog walkers from plunging into the well.