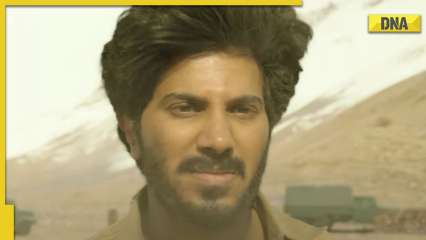 Dulquer Salmaan, Mrunal Thakur and Rashmika Mandanna starrer Sita Ramam have completed 50 days of release. Due to the super success of the film, the production house, Vyjayanthi Movies, has uploaded a deleted scene from the film.

The production house uploaded the scene to their social media, writing, “Here’s a deleted scene featuring our Ram & Vishnu Sharma from #SitaRamam.” In the series, we see Ram and Vishnu Sharma as prisoners in Pakistan, rejoicing moments of their captivity by playing soccer. The sequence is a heartbreaking, emotional moment and it will certainly leave you wondering why the scene was deleted.

Sita Ramam, starring Dulquer Salmaan, Mrunal Thakur and Rashmika Mandanna, was released on August 5 in Tamil, Telugu and Malayalam to rave reviews and critical acclaim. The film was later dubbed in Hindi and released in the Northern Belt almost a month later on September 2.

The OK Kanmani actor took to his Instagram on Saturday, September 17, sharing a lengthy note thanking the Hindi audience for showering love on their period romantic film. The actor shared a series of photos from a recent media event celebrating the success of the Hindi version of Sita Ramam.

Along with the photos, he wrote: “From the bottom of our hearts we would like to say a big thank you to the Hindi audience for the love that has gone out to the Hindi theatrical release of #SitaRamam. The love continues to flow and grow every day. And just so much love and gratitude to the Hindi media across the country for bringing visibility and support to the film.”

“It was an amazing event and we had the warmest reunion with our team. It always fills my heart to reunite with our Sita Garu @mrunalthakur, our captain Hanu mister @hanurpudi our very own maestro @composer_vishal, and of course our Godfather, my favorite #AshwiniDutt garu. Much love and gratitude to the pioneer Dr @jayantilalgadaofficial for holding us through this release,” he concluded.

‘Firefly’, starring Katherine Heigl and Sarah Chalke, will end on Netflix after season 2