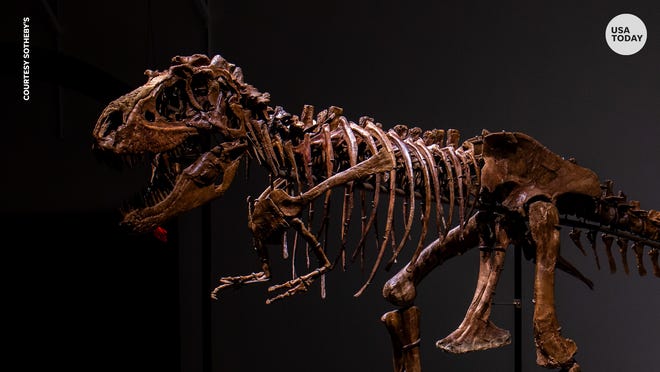 The fossilized skeleton of a 76-million-year-old ferocious dinosaur has sold for more than $6 million in one of the most expensive purchases for the prehistoric creatures.

The Gorgosaurus, meaning “fierce lizard,” was nearly 10 feet long, was 22 feet long, and could weigh up to 2 tons. The carnivorous creature with dozens of curved, serrated teeth roamed what is now the western United States and Canada in the late Cretaceous, about 10 million years before its well-known relative, Tyrannosaurus rex, appeared.

The skeleton was found in the Judith River Formation near Havre, Montana, in 2018, an “exceptional” discovery because of how rare it was to find fossils of the creature, New York City auction house Sotheby’s said.

When Sotheby’s announced that the fossil would go up for auction on July 5, the estimated sale price was at least $5 million, considering it was the first time a Gorgosaurus skeleton had been put up for sale. On Thursday, the piece sold for just over $6 million. The buyer has not been made public.

“In my career I have had the privilege of handling and selling many exceptional and unique objects, but few have the ability to spark wonder and imagination like this incredible Gorgosaurus skeleton,” Cassandra Hatton, Sotheby’s global head of science and popular culture, said.

The price for the Gorgosaurus isn’t the most expensive dinosaur fossil ever sold: In 2020, the skeleton of the Tyrannosaurus rex “Stan” sold for a record $31.8 million, setting a Guinness World Record.