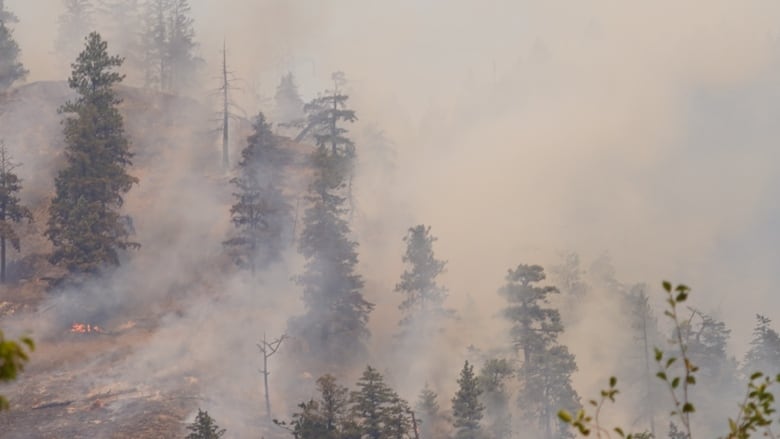 Emergency services have ordered all residents to evacuate from the BC community of Olalla, about 25 miles southwest of Penticton, because of the Keremeos Creek bushfire.

The unincorporated city, with a population of more than 400, was placed under full evacuation orders about 5 p.m. Thursday afternoon, with about 200 properties affected by the Okanagan-Similkameen regional district.

Half an hour later, residents of part of the village of Keremeos, BC, representing nearly 220 properties, were placed on evacuation alerts by municipal and regional authorities.

“This afternoon, the approaching cold front brought much higher winds than we’ve seen in recent days, increasing fire behavior,” said Mikhail Elsay, a fire officer with the BC Forest Fire Service. “We felt we needed to expand the evacuation orders to protect the communities fairly close to the fire.”

The agency said on its website that downwinds of more than 30 km/h at night pushed the fire down Highway 3A, towards Olalla in the south, despite the crew working through the night to contain the fire. west side of the highway.

The regional district, which has had to evacuate residents from a total of 547 homes so far this wildfire season, said motorists can expect Highway 3A. to be closed Thursday evening.

The bushfire in Keremeos Creek, which covers an area of ​​43 square kilometers, lasted the past day.

Firefighters have attempted to contain the blaze by lighting a series of planned fires near Highway 3A over the course of the week.

On Thursday evening, there were 62 wildfires in the province, extinguishing the majority of the 156 that started last week.

Most of them are located in the Kamloops Fire Center region, which also includes the Okanagan.

Just over half of the fires in the province are believed to have been caused by lightning strikes.