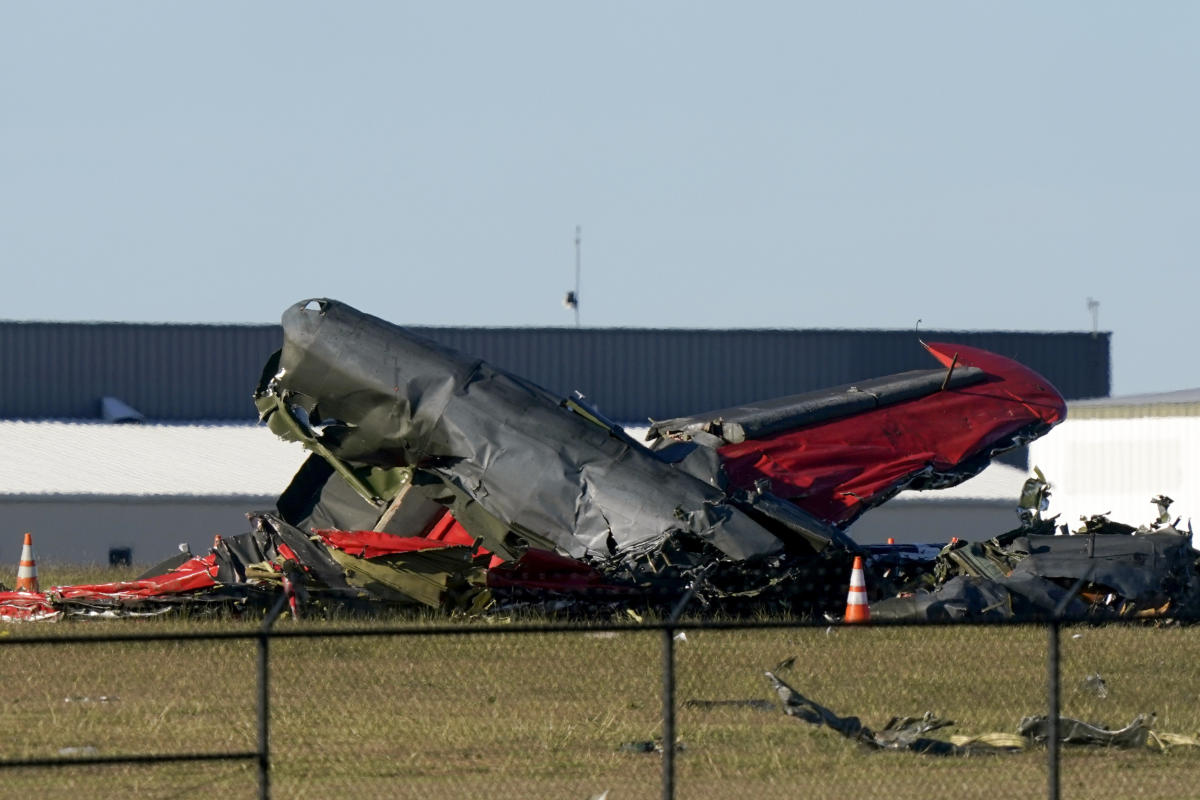 Saturday’s collision between two World War II military aircraft at a Dallas air show was the latest in a long list of crashes involving vintage aircraft used or designed for military purposes. Some recent fatal accidents in the US and abroad:

— October 2, 2019: A four-engine, propeller-driven B-17G Flying Fortress bomber with 13 people on board crashed into Bradley International Airport, north of Hartford, Connecticut, during a traveling vintage airplane show. Seven people were killed and six were injured. The National Transportation Safety Board found pilot error to be the likely cause, with inadequate maintenance as a contributing factor.

— November 17, 2018: A privately owned World War II Mustang fighter plane crashed into the parking lot of an apartment complex in Fredericksburg, Texas, killing the pilot and a passenger. The P-51D Mustang returned after running over an overpass during a living history show at the National Museum of the Pacific War. The plane was destroyed and several vehicles in the parking lot were damaged.

Aug 4, 2018: A 79-year-old Junkers Ju-52 aircraft from the Swiss company Ju-Air crashed into the Piz Segnas mountain near the Flims ski resort in eastern Switzerland, killing all 20 on board. Retired from the Swiss Air Force in 1981, the German-built aircraft carried tourists who wanted to take “adventure flights” to experience the country’s scenery in vintage aircraft. Swiss investigators said “high-risk flights” by the pilots led to the crash.

— May 30, 2018: A small vintage plane that was part of a GEICO stunt team with five other planes crashed into a wooded residential area in Melville, New York, killing the pilot. The World War II SNJ-2 aircraft, known as a North American T-6 Texan, had taken off from a nearby airport and was en route to Maryland when it crashed.

July 16, 2017: A pilot and an airport manager were killed in Cummings, Kansas, after their World War II P-51D Mustang “Baby Duck” crashed into a field. According to authorities, the pilot performed a stunt he performed at the Amelia Earhart Festival the day before.

— January 26, 2017: A World War II Grumman G-73 Mallard flying boat came to a stop and dove into the Swan River in Perth, Australia, during Australia Day celebrations. Both the pilot and his passenger were killed.

– August 27, 2016 – An Alaskan pilot was killed when his 450 Stearman biplane, a World War II aircraft often used for military training, crashed during the Airshow of the Cascades in Madras, Oregon.

— July 17, 2016 — A T-28 Trojan, used by the United States military in the 1950s as a training aircraft and also as a counter-insurgency aircraft during the Vietnam War, crashed at the Cold Lake Air Show in Alberta, killing the pilot came to life. Thousands of spectators witnessed the accident.

– August 22, 2015 – A 1950s Hawker Hunter T7 jet crashed on a busy highway near West Sussex, England, killing 11 and injuring more than a dozen others. Investigators said the pilot, who survived, flew too low and slow to successfully complete a loop-the-loop. He was charged with 11 counts of manslaughter, but was eventually acquitted.

– June 22, 2013 – A pilot and a wing-walker were killed when their World War II Boeing-Stearman IB75A crashed into the ground and caught fire during a performance at the Vectren Dayton Air Show in Vandalia, Ohio. Thousands of spectators saw the crash, which federal safety investigators say was likely caused by pilot error.

– September 16, 2011 – The pilot of a 70-year-old modified P-51D Mustang dubbed the Galloping Ghost lost control of the plane during the National Championship Air Races and Air Show in Reno, Nevada, and crashed into spectators, killing he perished. 10 and injuring more than 60. The pilot also died. Federal investigators blame worn parts and speed for the crash.