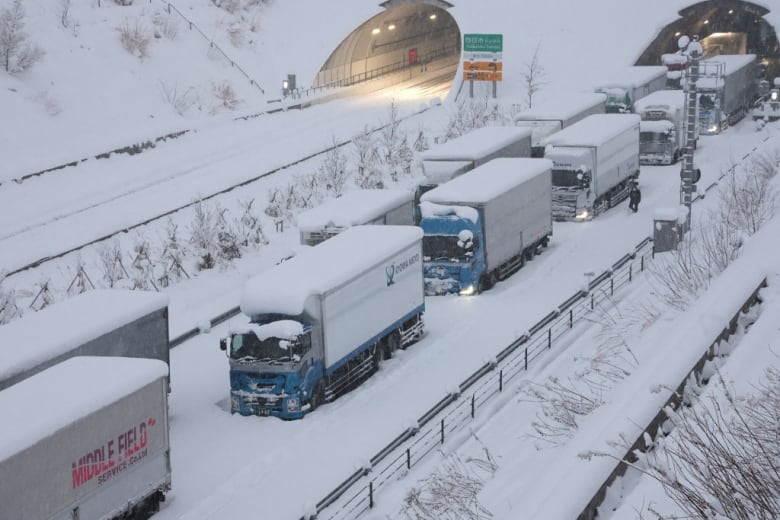 Frigid winter weather gripped East Asia for a second day in a row on Wednesday, leaving several dead and injured in Japan and a scramble for flights from South Korea’s resort island of Jeju due to snowstorm delays.

South Korea’s interior and security ministry has not immediately reported major damage or injuries from freezing temperatures and icy conditions that have affected most of the country since Tuesday.

But at least eight roads and ten sea routes remained closed as of Wednesday afternoon. About 140 homes in the capital Seoul and nearby regions reported broken water pressure pumps or pipes as mainland temperatures dipped to about -15C to -20C.

A man died in Oita, in southern Japan, after being struck by a fallen tree, and two more deaths in northern Niigata prefecture were being investigated in connection with the cold weather, officials said.

Two other people were found without vital signs in Okayama, western Japan. Deputy Chief of Cabinet Yoshihiko Isozaki told reporters that the deaths could be related to snow removal accidents and urged residents to refrain from such activities when no one else is around to help in an emergency.

About 400 homes across the country were without electricity due to damage to the power grid caused by fallen trees, the Ministry of Economy and Industry said. It said traffic disruptions caused by the snow also caused delivery delays to convenience stores in western Japan.

Afghans say a bitter cold snap brings deprivation and death. Many people are without coal, a stove or warm clothes and want the government to provide some relief.

Thousands of people using train services in western Japan’s Kyoto and Shiga prefectures were forced to spend the night in carriages or stations, and 13 were taken to hospitals, the Fire and Disaster Management Agency said. Vehicles on major roads across the country were left stranded and hundreds of flights canceled. Kyoto Prefecture reported more than 30 injuries, mostly from falls.

Air traffic returned to normal after hundreds of flights to and from Jeju were grounded on Tuesday due to high winds and snow, stranding an estimated 40,000 travelers who had visited the resort island for a Lunar New Year holiday.

About 540 flights, including nearly 70 temporarily added by transportation authorities as emergency relief, were scheduled in and out of Jeju on Wednesday alone, mostly to take passengers back to mainland cities.

The Korea Airports Corporation said opening hours at Gimpo Airport near Seoul were extended to 1 a.m. local time to accommodate increased flights, which were expected to bring back 70 to 80 percent of passengers trapped in Jeju.

The island saw more than 19 inches of snow since Tuesday morning, while towns and villages in the south of the mainland, such as Gwangju and Gangjin, reported about 10 to 12 inches of snow. More than 70 centimeters of snow has fallen on the small eastern island of Ulleung.

Winter storms appeared to be moving into the greater Seoul area and nearby regions, where heavy snow was expected from late Wednesday to Thursday afternoon, according to the Ministry of Security, which warned of dangerous road conditions.

Officials in Gyeonggi province, which surrounds Seoul, said nearly 7,000 cold-weather shelters will be opened across the region and several thousand tons of snow-clearing chemicals will be used to improve the safety of roads that could become icy.

US tracks suspected Chinese spy balloon, but doesn’t shoot it down | TBEN news