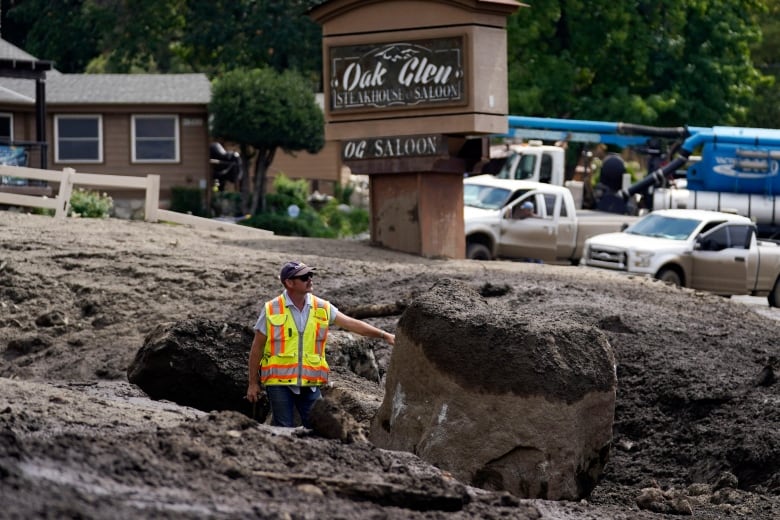 Rescuers searched for a missing person in a mudslide on Tuesday as large yellow tractors plowed through dark, thick silt and pushed boulders off the road after flash floods swept away soil, rocks and trees from fire-covered slopes, cars and buried buildings in small mountain communities. washed away in Southern California.

With thunderstorms forecast and more mudslides possible until Wednesday, evacuation orders remained in effect in parts of the San Bernardino Mountains, while a wildfire that raged 805 kilometers to the north forced residents to leave their homes.

East of Los Angeles, crews searched street by street for people who might have been trapped in mudslides that the day before swept rocks, trees and other debris into Forest Falls, Oak Glen and Yucaipa with astonishing force, leaving a muddy mess and untold destruction.

Homes and other buildings were damaged, including a commercial building that was buried so high that the roof collapsed, said San Bernardino County Fire Department spokesman Eric Sherwin.

ALSO READ  As the war raged around him, this Ukrainian director completed his film in time for TIFF | TBEN News

“We have boulders that went through and weigh several tons,” Sherwin said. “It can take days to find all the cars that are missing because they are completely covered in mud.”

A video showed a slow-moving black river of silt rolling past the sign for the Oak Glen Steakhouse and Saloon, followed seconds later by a wave of deeper mud carrying logs. The mud seemed to be head high in places the next day.

Officials lifted a number of mandatory evacuation and shelter orders on Tuesday evening.

Workers were able to clear most of Valley of the Falls Drive—the only road to Forests Falls—and teams assessed the damage. Other major roads in the San Bernardino Mountains were reopened.

It was too late to evacuate for some homes in Forest Falls on Monday. Residents were told to shelter in their places all night because it was safer than going outside.

The rains were the remnants of a tropical storm that brought high winds and some much-needed rainfall to drought-stricken Southern California last week, causing firefighters to largely corral the Fairview Fire, which had become uncontrollable about 20 miles south of the mudslides. .

The mudslides and flash flooding occurred in parts of the San Bernardino Mountains where there are burns – areas where there is little vegetation to hold the ground – from the 2020 wildfires.

“All that dirt turns to mud and starts sliding down the mountain,” Sherwin said.

The powerful thunderstorms came after a week in which California endured a record-long heat wave. Temperatures in many parts of the state shot above 38°C, pushing the state’s electrical grid to breaking point as air conditioners sucked power.

The tropical storm helped the crew fight the Fairview Fire, about 75 miles southeast of Los Angeles. The 114 square kilometer fire was 62 percent under control on Tuesday. Two people died fleeing the fire that destroyed at least 35 homes and other buildings in Riverside County.

The Mosquito Fire that burned 177 kilometers northeast of San Francisco broke out in the afternoon, just hours after officials reported making “great progress” in the battle.

“We’ve got all hands on deck,” fire spokesman Chris Valenzuela said as the fires burned near Todd Valley and Foresthill. “It burns very erratically and intensely.

Scientists say climate change has made the West warmer and drier over the past three decades, and the weather will continue to make more extremes and wildfires more frequent and devastating. In the past five years, California has experienced the largest and most devastating fires in its history.

Hundreds of wildfires and a blistering heat dome threaten to take California’s power grid offline amid unprecedented demand for energy.

ANALYSIS | With Quebec Liberals in Charge, Liberalism in the Province Is at a Crossroads | TBEN News