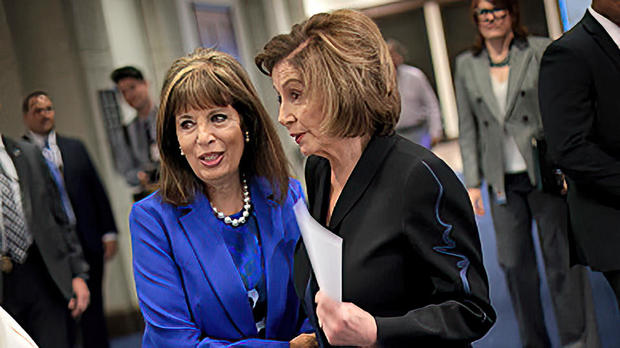 WASHINGTON — House Speaker Nancy Pelosi announced on Saturday that she will lead a congressional delegation to Armenia this weekend, which her office says made her the most senior U.S. official to visit the country since independence in 1991.

The trip is designed to highlight the “firm commitment of the United States to a peaceful, prosperous and democratic Armenia and a stable and secure Caucasus region,” the California Democrat said in a statement on Saturday.

Joining Pelosi are Democratic lawmakers, they referenced on Twitter as “proud and longtime champions of Armenia”: Representatives Frank Pallone of New Jersey and Jackie Speier of California, co-chairs of the Congressional Caucus on Armenian Issues; and Rep. Anna Eshoo from California, a member of the caucus. Both Speier and Eshoo are of Armenian descent.

The visit follows deadly clashes earlier this week along the border between Armenia and Azerbaijan. The two former Soviet states are embroiled in a decades-old dispute over the territory of Nagorno-Karabakh. This week’s violence raised concerns that the two nations could be on the brink of rekindling their conflict, but a senior Armenian official said late on Wednesday that a ceasefire had been agreed with Azerbaijan.

President Joe Biden last year became the first US president to officially recognize the massacre of Armenians under the Ottoman Empire during World War I as a genocide.

Both the US House and Senate passed a resolution in 2019 that would “commemorate the Armenian Genocide through official recognition and commemoration” of “the murder of 1.5 million Armenians by the Ottoman Empire from 1915 to 1923”.

Turkey has maintained that the killings do not constitute genocide, saying it was wartime and there were losses on both sides. Turkey is also disputing the death toll, bringing the figure closer to 300,000.

“It is the moral duty of all to never forget: an obligation that has become increasingly urgent as atrocities are perpetrated all over the world, including by Russia against Ukraine,” Pelosi said in her statement on Saturday.

She also added that the congressional delegation will meet with Armenian heads of government in the country’s capital, Yerevan, including Alen Simonyan, chairman of the Armenian National Assembly, as well as members of the security organization and members of civil society, Pelosi said. .

Pelosi and the delegation members will hold a press conference Sunday afternoon local time after a bilateral meeting with Simonyan, her office said. Pelosi is also expected to make comments at the Cafesjian Center for the Arts to “reaffirm America’s strong support for the people of Armenia and for their security and democracy,” her office said.

Earlier in the week, Pelosi attended a summit of parliamentary speakers from G7 countries in Germany, where she spoke on Friday about the “continued and united response” to Russia’s war against Ukraine.

She recently made a high-profile overseas trip, visiting Taiwan in August to show support for the self-ruled island — a move that greatly angered Beijing and strained US-China relations.

In response to Pelosi’s visit to Taiwan, China announced sanctions against the speaker and her immediate family, suspended cooperation with the US on several issues, including talks on climate change, and conducted several military exercises around the island.

China’s ruling Chinese Communist Party considers Taiwan part of the country’s territory, despite never having controlled it, and has long vowed to “reunite” the island with mainland China, by force if necessary.

The Bharat Express News - October 2, 2022 0
On Sunday, September 25, athlete Eliud Kipchoge broke one of his many records when he ran the 42-kilometer BMW Berlin Marathon in a record...