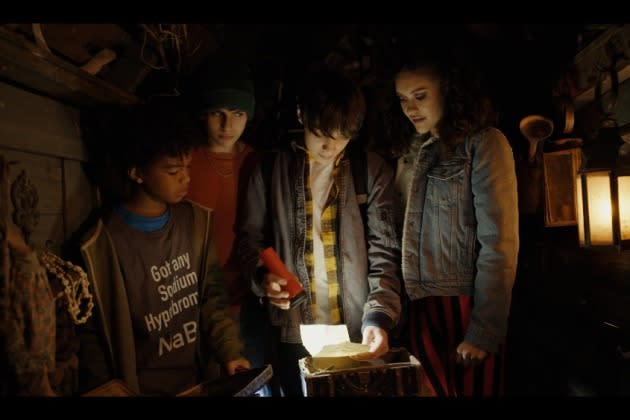 The scariest time of the year is upon us, and with it comes a new take on “Spirit Halloween: The Movie,” an upcoming movie based on the ubiquitous pop-up costume shop.

The new teaser trailer tells the story of a group of boys, played by Donovan Colan, Dylan Martin Frankel and Jaiden J. Smith, who decide to spend the night in an abandoned Spirit Halloween store, only to find out that the products and animatronic creatures came to life and set out to chase them. The boys must work alongside Kate, played by Marissa Reyes, to defeat the ghost trapped in the shop before midnight or else he’ll possess one of them forever.

In Spirit Halloween: The Movie, Christopher Lloyd plays Alec Windsor, a deceased man whose ghost owns everything in the abandoned store and terrorizes the group of children. Rachael Leigh Cook also stars as one of the boys’ mothers, Sue, who remarried after her husband recently passed away.

The film’s trailer premiered during the opening of Spirit Halloween’s Flagship Store on July 30 before debuting online, with Colan, Frankel and Smith appearing at the event. David Poag directed the film from a screenplay by Billie Bates. Hideout Pictures, Strike Back Studios, Particular Crowd and Film Mode Entertainment produced the film. The film was primarily shot on the grounds of an abandoned Toys R Us location in Georgia, and production took place from late 2019 to November 2021.

The film will debut on October 11 on demand. Watch the full teaser trailer below.