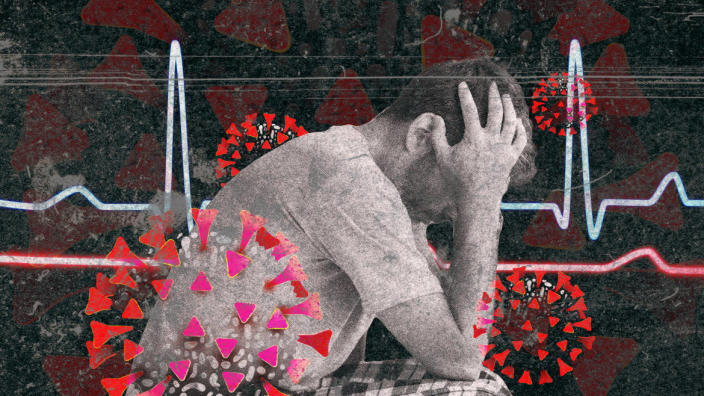 A mild case of COVID to many people resembles a cold, a comforting illusion that reinforced President Joe Biden’s recent bout with the virus, even as a new positive test returned him to quarantine. And yet, for all the cheery talk, the virus continues to remind us that it can wreak havoc on relatively young, healthy people.

This is the story of a 49-year-old former Navy SEAL — still on top form — who tested positive for COVID on the second day of a family trip to Alaska. He learned the hard way that his superior physicality was no match for the coronavirus.

We will call him Sam because he doesn’t want his name used to be candid about the brain effects he is still experiencing that could “stay COVID” for a long time, and to protect his health record and that of his family” from a pre-existing medical condition,” as Sam put it to The Daily Beast.

Sam had accompanied his wife and 12-year-old daughter for a week over the holidays due to work commitments. “As a former Navy SEAL raising a daughter to be tough outdoors,” he planned time north of the Arctic Circle to hike through Katmai and Denali National Parks to see the grizzly bears catching live salmon just upriver the week before. had started running.

They were traveling with his 80-year-old father-in-law and to protect him, the family tested for COVID in the morning and evening. “My daughter went downstairs first,” Sam said. It was the morning of his second day in Alaska, and they were far north of civilization.

“We could see our daughter’s lethargy increase as she slid down,” Sam noted. They chartered a small private plane back to Fairbanks, where they spent six hours in a hospital emergency room rehydrating their daughter with IV fluids. Her throat was so sore she couldn’t eat or drink.

A silhouette of a patient being treated in the COVID-19 intensive care unit of the University Hospital Leipzig in Leipzig, Germany.

That night, Sam and his wife tested themselves. She was negative, but there was a faint line on his test, worrying enough that they slept with their N95 masks on. By morning there was no doubt. Sam was strongly positive and showed symptoms. Now there were two down. What if his wife got sick too?

They struggled to book enough rooms to quarantine, and instead of jumping between hotels in the crowded tourist town, they decided to drive a seven and a half hour drive from Fairbanks to Anchorage in search of more accessible health care. They rented a car that his wife drove 80mph with the windows and sunroof open, with his daughter slumped against her seat belt in the back seat using a “Type to Speak” app because of her sore throat. They were all masked.

The cost of an already expensive trip had become astronomical. They had already paid for the remote cabin in Denali. In Anchorage, it amounted to nearly a thousand dollars a day to find last-minute hotel rooms to isolate the uninfected (his wife) from those who are in an infection stage for several days in a row, hoping to get their daughter healthy enough to make it to a previously scheduled summer camp.

In Anchorage, Sam searched for monoclonal antibodies over the phone and soon discovered that of the limited supplies Alaska had left, none were tackling Omicron and its variants. Finding a pharmacy that would give him Paxlovid without a prescription seemed futile, so he called the Veterans Administration (VA) and was told he could get health care at Elmendorf Air Force Base, once they enrolled him in the system as a veteran no longer on active duty.

“Kudos to the VA – love the VA,” said Sam. When he arrived at the base hospital, he encountered a sign that read, “Do not enter if you are COVID positive.” It took half an hour to let him in through a back entrance, but once inside it was a while before a doctor saw him. By this time, Sam’s temperature was 102 and his blood oxygen levels were drifting from the low 90s to 88 and 89. He’s normally 98. Below 95 is worrying.

The doctor prescribed Paxlovid, which to be effective must be started within five days of first symptoms. Sam was on day three. The drug is known to leave a metallic aftertaste. “I felt like I was sucking on an aluminum rod,” he says, an acceptable inconvenience given the alternative. “On day eight I definitely felt better, but I still felt tired and severe brain fog.”

The family was quarantined at the hotel in Anchorage, left a “Do Not Disturb” sign on the door and only went out when necessary and always masked. They spent the time watching Marvel Universe movies while Sam, a self-proclaimed “prodigious researcher,” read medical journals to educate himself about this virus that he believed was tampering with his brain.

It was how he coped, Sam said, learning all he could about the science of this virus that had turned his life upside down. A few blocks away, former President Donald Trump was holding a “Save America” rally and the hotel was packed with unmasked rally-goers unaware of the active COVID in their midst. “We tried not to give it to them in the elevator when we went to pick up food deliveries, with our N95s on,” Sam added.

He started testing negative on day 10 but did not feel fully recovered. Sam emailed his mom and brother to say, “Take it from me, you can’t rely on our genetics to slide you through COVID.”

A tall COVID patient does respiratory training in a gym of the Teutoburger Wald Clinic, a rehab facility for post-COVID patients.

As he drove home, Sam said, “A cold doesn’t give you brain inflammation.”

“I didn’t realistically think I was going to die because I got three injections of the vaccine,” Sam added. “But because the brain fog didn’t go away with the other symptoms, I was petrified. What if it takes a long time? Or [become] permanent, as I have read about many Americans for whom it has not completely disappeared?”

Brain lethargy isn’t just being tired, Sam said. It’s like having a burnout from the start of the day, in addition to being tired. To someone who is used to driving himself, he said on day 20: “You don’t know what it’s like to lose your ambition overnight. I used to greet the day enthusiastically, now I think about how nice it would be to stay in bed and read all day.”

A few days later, Sam reported that he intended to return to “my normal ambitious self,” but it didn’t work out. “I struggle not to feel like I’m weaker because it hit me harder than others.”

Sam has concluded that seven and a half months after his third dose of the COVID vaccine, his immune system “considered the little bastard invaders no big deal, until it was a big deal and they got into my lungs, and then it was decided to go into overdrive.”

“I’m not 100 percent yet,” he told The Daily Beast on Day 26, noting that his previous workweek attempt had been disastrous. “Part of me wants to say I’m better and that will become a self-fulfilling prophecy, and part of me is telling the truth because I may need help.” The changes he describes as brief memory loss or difficulty staying focused resemble normal signs of aging, but unlike the slow aging process, these are sudden changes, “like aging 20 years in less than a month.”

Prosecuting Trump before January 6 is worth the political risk

Sam’s father-in-law, at age 80, previously flew home from Alaska and did not contract the virus. His wife never got it either. They had each been given a second booster four weeks before the trip. Sam’s daughter recovered quickly enough to go to camp, although it took 10 days.

This story is a good demonstration of how difficult and expensive it can be to find shelter for quarantine, to protect the uninfected in the family and the general public. And it also shows how, in the third year of the pandemic, getting the necessary treatments for a severe case of COVID requires high-quality health care coverage, the determination to seek good care and the resources to obtain the medication. – which can often be low supply, especially in remote areas.

These are societal “COVID issues” that are often glossed over and should be prioritized by governments, especially if they are determined to “keep going”.

Living with the virus requires a healthy respect for its ability to evolve along with an understanding of our limitations as humans to ward off its worst effects. The story of a former Navy SEAL is a cautionary tale that we are in the third year of a pandemic and that COVID still packs a punch.