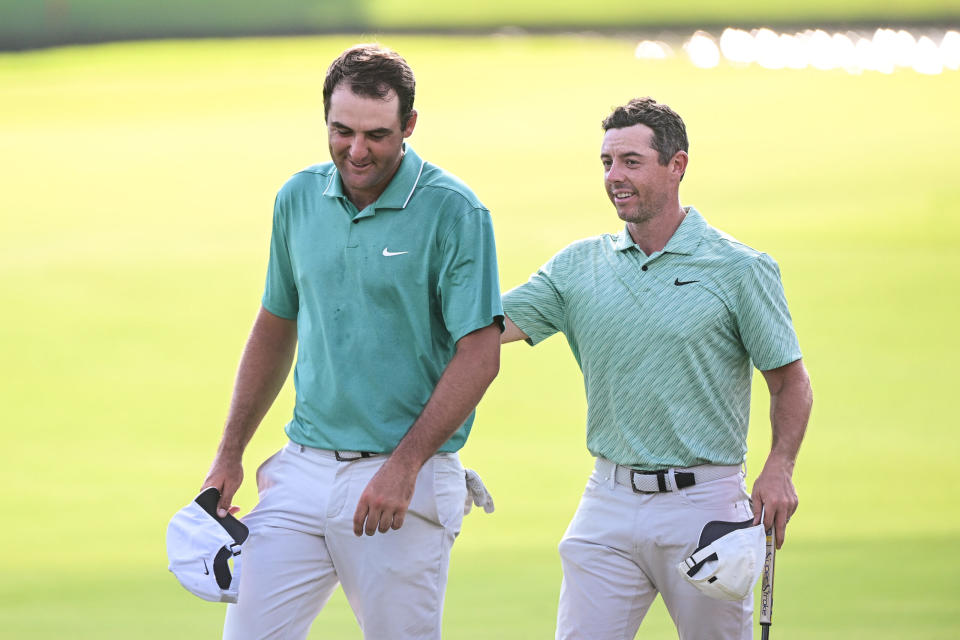 A 56-second video set the golfing world ablaze Wednesday when the first official trailer for “Full Swing,” a Netflix documentary about professional golf, was released.

News of the project – which will be available to stream on February 15 – broke over a year ago, and fans have been eagerly awaiting the much-anticipated series, especially after LIV Golf burst onto the scene. Last January, it was confirmed that 23 players would be part of the show, but the trailer only announced 14 players, including world No. 1 Rory McIlroy.

Taking a look at the players seen in the trailer, here are a handful of storylines we hope to see when the show goes live:

The biggest show on grass

We should start here at the People’s Open. The cameras rolled as the beer cans rained over the famous 16th hole, and also as Joel Dahmen and Harry Higgs took off their shirts to celebrate. It was a great tournament and I can’t wait to relive it all again.

Not to mention there must be some great content on the 16th to talk to some of the more hydrated fans, right?

Joel Dahmen and Harry Higgs take their shirts off on the 16th hole during the final round of the 2022 WM Phoenix Open at TPC Scottsdale. (Photo: Mike Mulholland/Getty Images)

Scottie Scheffler won four events over six starts last season and the cameras were there to capture everything from his first at the WM Phoenix Open to his last at the Masters. Not only will we get to see Scheffler behind the scenes on this incredible run that led him to World No. 1, but fans will also get to see Augusta National up close and personal in a way they’ve never seen before.

How much will Rory McIlroy be involved?

The world number 1 was not previously on the list of confirmed players, but he made a smashing appearance at the end of the trailer. Journalist Jamie Weir warned fans to temper their expectations for McIlroy’s involvement, to which producer Chad Mumm said we will be Pleasantly surprised.

Last year was a big year for McIlroy. He won the PGA Tour’s FedEx Cup for a third time and the DP World Tour’s Race to Dubai for a fourth time, while consistently speaking out against LIV Golf. Frankly, it doesn’t matter how much or how little McIlroy is involved. He says what he thinks and his view of the game is now more valuable than ever before.

Storybook win at the Country Club

Matt Fitzpatrick winning the US Open at The Country Club, the site where he won the US Amateur in 2013, is a Hollywood-level story. Unfortunately for Fitz, a movie has already been made about a US Open at the famed Massachusetts club, so he’ll have to settle for “Full Swing.”

Simple and straightforward, I can’t wait to see what the cameras got that week.

Matt Fitzpatrick celebrates winning the US Open with caddy Billy Foster during the final round of the US Open. (Photo: Peter Casey-USA TODAY Sports)

Sahith Theegala, one of the top young players on the Tour, has three top-five finishes in 2022 at the WM Phoenix Open, Arnold Palmer Invitational and the Travelers. Theegala is always a great quote during interviews and fringe golf fans unfamiliar with his game and personality might see him as the show’s breakout star.

The return of Jordan Spieth

Last year was another good year for Jordan Spieth as he returned to the conversation among the golfing elite. He won at the RBC Heritage and finished second at the AT&T Byron Nelson the following week, his second runner-up finish of the season. That said, he was largely a non-factor at majors, with a best finish of a T-8 at the Open. It will be intriguing to see how the show treats the widely loved Spieth. The creators of “Full Swing” are also lagging behind Formula 1: driving to survive, and they did a phenomenal job with favorite driver Daniel Ricciardo. Let’s see how they treat Spieth.

Jordan Spieth of the United States makes a putt during The Match 7 at Pelican at Pelican Golf Club on December 10, 2022 in Belleair, Florida. (Photo by Mike Ehrmann/Getty Images for The Match)

Fortunately for the rising star on the Tour, his performance last week at the Sentry Tournament of Champions will not be featured on the show (at least this year). I’m hesitant to call him another potential breakout star for the show, because at just 25 years old, Morikawa already has five PGA Tour wins to his credit, including a pair of majors. Last season was his first without a win since turning pro in 2019, but the former Cal star still managed to miss just four times and make the top 10 on eight occasions.

We know a lot about Morikawa, the player. After seeing how he reacted to his historic meltdown in Hawaii, I hope the show describes Morikawa, the person, a little more.

Collin Morikawa acknowledges after making his putt on the first hole during the final round of the Sentry Tournament of Champions golf tournament at Kapalua Resort – The Plantation Course. (Photo: Kyle Terada-USA TODAY Sports)

Family time with the Finaus

Tony Finau is having the most successful season of his career. After a two-win campaign, including seven top-10 finishes in the 2021-22 season, Finau already has another win under his belt this season. In Drive to survive, viewers get to see many drivers and their lives at home. No doubt the cameras got some good content with Finau, his wife Alayna and their five children.

The (not so) real question that needs an answer, though: How many horribly patterned shirts are actually in his closet?

Tony Finau with caddy Mark Urbanek on the second fairway during the second round of the PGA Championship golf tournament. (Photo: David Yeazell-USA TODAY Sports)

Speaking of families, meet the Poulters

Ian Poulter is one of the more divisive figures in the game who have brought their talents to LIV Golf, but the trailer showed plenty of clips of Poulter the dad with his kids, both on the golf course and on the trampoline. His son, Luke, is a freshman on the Florida golf team and is a pretty good player in his own right.

Unfortunately for Poulter, the trailer also shows him losing his mind via a locker room tantrum at the WGC-Dell Match Play. It’s been a tough week online for Poulter.

We know Dustin Johnson likes to work out, but can he still hoop? I’m sure most of his time on the show will be focused on his move to LIV Golf, but the trailer showed DJ wielding a basketball and it seemed pretty smooth.

Golfers are athletes too, people forget.

Joaquin Niemann had an interesting year himself. After winning the Genesis Invitational, Tiger Woods’ event near Los Angeles, he finished T-11 in the Tour Championship before heading to LIV Golf. Niemann was not one of 23 early players confirmed last January, but was clearly added after his Genesis win.

ALSO READ  Saturday in Waialae: Several players compete for first win, packed with leaderboard and more from Sony Open third round in Hawaii

As a young player who had a bright future with the PGA Tour, I’m curious to see if we learn anything about his LIV decision once the cameras start rolling.

Event host Tiger Woods poses with tournament winner Joaquin Niemann after the final round of the 2022 Genesis Invitational at the Riviera Country Club in Pacific Palisades, California. (Photo: Gary A. Vasquez-USA TODAY Sports)

What is Brooks Koepka up to?

Another LIV player signed to the Netflix show from the start, Brooks Koepka had a largely forgettable final season on the Tour before he – his words – sold out and took the money to join the Saudi-led supported circuit.

Aside from a T-3 at the WM Phoenix Open and a T-5 at the WGC-Dell Match Play, Koepka struggled on the 2022 Tour with seven missed cuts to just nine (although he did win at LIV at his event in Saudi Arabia). -Arabia). ). The show seems to have some sailing time with Koepka, and the four-time grand winner can talk to his best of them. I’m sure he’ll say something nice.

Brooks Koepka tees off on the 6th hole during the Pro-Am Tournament for the LIV Golf Series at Trump National Doral. (Photo: Jasen Vinlove-USA TODAY Sports)

Last but not least, the PGA Championship

Justin Thomas won another major in a playoff at the PGA Championship last year and seems to be heavily involved in the show. However, the talk of PGA coverage will no doubt focus on Mito Pereira and his missed opportunity for history. After leaving his birdie putt on the lip on the 17th, Pereira drilled his tee off at 18 into a creek on the right side of the fairway and made double bogey 6 to miss a one-shot playoff.

As our Steve DiMeglio wrote, “In 15 minutes he lost his grip on the Wanamaker, his place in history and his chance to put his first PGA Tour title on his resume.”

Pereira was listed as an early commitment to the January show, so I imagine the cameras were rolling all week in Southern Hills. It’ll also be interesting to see if the producers can change anything after his recently reported move to LIV Golf.

Mito Pereira reacts on the 17th green during the final round of the 2022 PGA Championship at Southern Hills Country Club on May 22, 2022 in Tulsa, Oklahoma. (Photo by Christian Petersen/Getty Images)