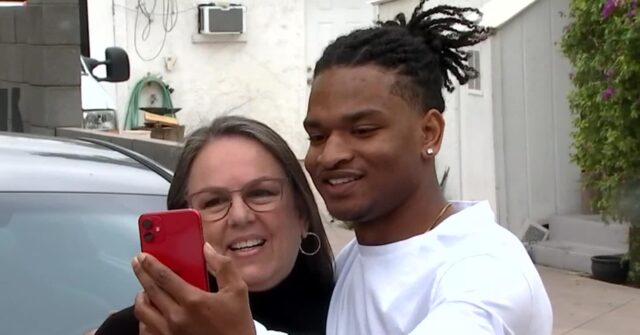 When the best laid plans fail, accidents can take their place and the result can be just as good, if not better. Just ask Jamal Hinton and Wanda Dench, complete strangers who met seven years ago after a text message looking for Thanksgiving plans went wrong.

On Tuesday, Nov. 22, Hinton shared a photo next to Dench outside a Cheesecake Factory restaurant, which showed the two continuing their viral tradition that started entirely by chance.

“To answer all your questions: yes, Thanksgiving year 7 is planned! See you Thursday guys!” Hinton captioned the photo with turkey and black heart emojis.

It was for her grandson, who had changed his phone number. Instead, Hinton got the message while in class at Desert Vista High School.

When the teen asked who sent it, Dench replied, “Your grandma,” with an elderly woman emoji.

Hinton wrote back asking for a photo to prove the number really belonged to his grandmother.

After she sends a selfie picture of herself at work, he replies with a picture of his face and a text that she’s not his grandma.

“Can I still get a plate?” suggested Hinton softly.

“Of course you can. That’s what grandmas do… feed everyone,” she replied with a piece of cake emoji, and that’s how the pair have continued to this day.

We are ready for group 6! pic.twitter.com/wEQioizWGd

Hinton had told his social media followers last week that the two would celebrate the day together again.

In an interview earlier this week with azfamily.com, Dench and Hinton reflected on their friendship.

“I would have missed out on a great relationship,” said Dench, when asked what would have happened if she hadn’t invited Hinton years ago. “I have changed my view of the younger generation so much, and looking back at all these years, I have not changed their lives; they changed mine.