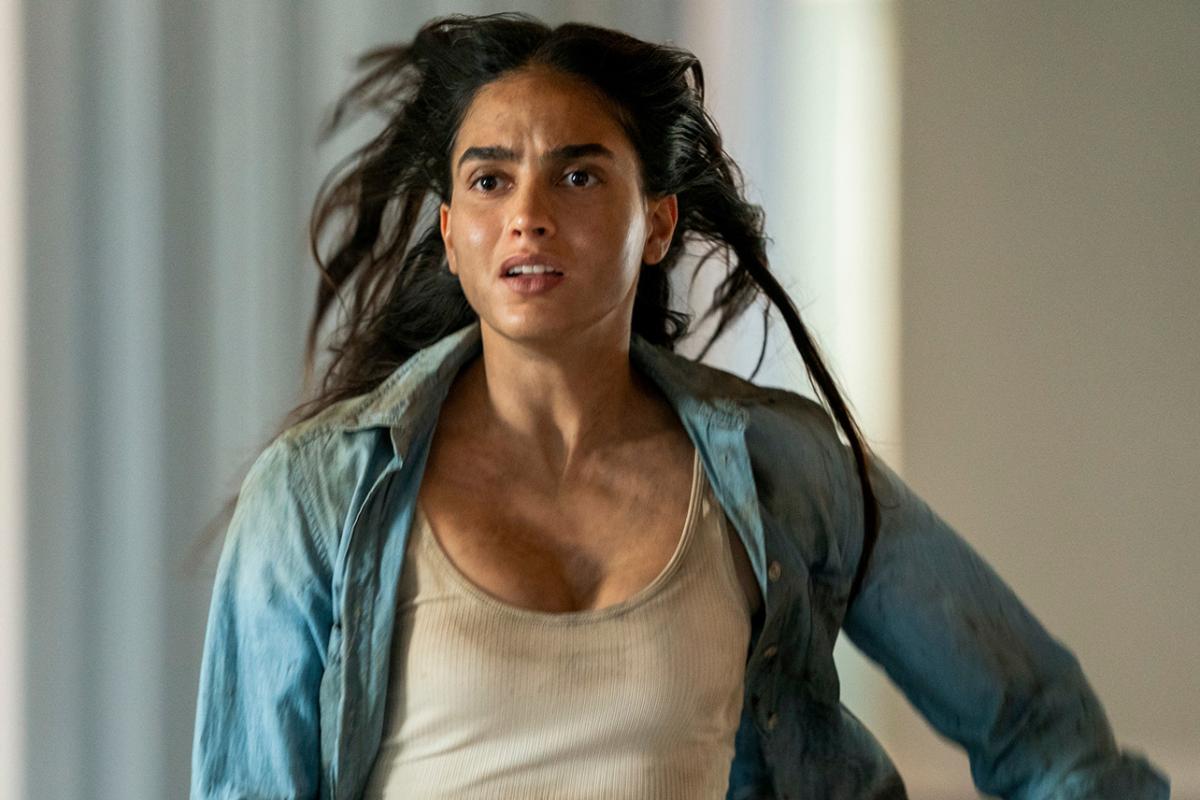 Melissa Barrera’s profile has been on the rise in recent years, since she was cast as one of the protagonists in the Starz series Vida. Since that show debuted in 2018, she has been in the scream franchise and the movie version of In the heights. In all those projects, it was hard to take our eyes off her when she was on screen. In her latest project, Barrera will basically be on screen most of the time, and much of the time she will be alone. Can she handle such a daunting acting job?

Opening shot: At a small airport in Canada we see the destination Inuvik, in the Northwest Territories, blinking on the departure board.

The core: Olivia Rivera (Melissa Barrera), a hotshot young lawyer from New York, waits at this airport for her flight to Inuvik, which is delayed. Liv tells the clerk she has to go to the small town that day, because the person she meets there doesn’t know she’s coming. In desperation, she hitchhikes with Sam (Austin Stowell), who claims to be a National Geographic photographer, and his pilot.

Before and during the flight, she thinks about her mother (Florencia Lozano) and how she started her relationship with Danny (Jeff Wilbusch), an employee of her company that was formed after a merger. But she is shaken awake when the plane begins to descend and eventually crashes into a lake in the Canadian wilderness. The pilot dies in his seat, but Liv somehow manages to get out and drag Sam, who isn’t swimming, to shore. But he quickly loses blood due to a large shrapnel in his leg. Liv takes both of their phones and sees if she can get help and call for help.

The next morning, she hears from a dying Sam that no one will find them, as he is not a photographer and the flight plan was never submitted (i.e. they did anything less than legal). In other words, Liv is alone, in the middle of nowhere, and no one knows where she is.

What shows will it remind you of? The best comparison we can make is the Tom Hanks movie Put awaythough we doubt Barrera’s character will befriend a volleyball and call it Wilson.

Our opinion: Because Keep breathing is more or less a limited series for one person, its success will depend heavily on its star. Yes, Liv will think about her life and why she had to go to Inuvik so urgently, and other characters will be involved. But the survival scenes will all rest on Barrera’s shoulders. And producers Brendan Gall, Martin Gero and Maggie Kiley couldn’t have found a better person to carry a show like this.

Some viewers may know Barrera from the film adaptation of In the heights or the last in the scream franchise, but we know the best from the Starz series here Vida, and we were impressed with how dynamic she was there. She shows the same skills in this series; while Liv is definitely harder and more closed off than she is Vida character Lyn, both characters are survivors in their own way, determined to live the way they think they should live.

Barerra takes on a monumental task here, essentially having to play the majority of the scenes alone, with only the elements and inanimate objects to play against. And we already see in the first episode that she is more than capable of that. Despite the idea that Liv is a civilian lawyer who may not be able to adapt, Barrera sells the idea that she can absolutely survive, making her ingenuity in the situation almost plausible.

Now we just need to see where the plot is going, what will play out in those flashbacks. Why is she on this trip? How does Danny fit into the picture? Why are her parents on her mind all the time? And what did Sam do if he’s not a wildlife photographer?

One of the things we love about the six-episode series is that the episodes are all about 30 minutes long, so you don’t see Liv wandering the wilderness for hours on end. We’ll see her fight for survival and hopefully get our questions answered in just under 3 and a half hours, and for someone who’s burned out by dramas coming in an hour or more per episode (we’re still slogging our way through Stranger Things 4for example), the brevity of each episode is refreshing.

Gender and skin: Liv and Danny watch them make love in a flashback, but not much skin is shown.

Farewell Shot: Liv fishes a photo out of the water that floated out of the plane. It’s an ultrasound of a baby. Is/was it hers?

Sleeping star: We pass this on to the beautiful scenes of the British Columbia wilderness where the show was filmed.

Most Pilot-y-line: Sam calls his pilot George (Mike Dopud) “pilot vulgar”, which was funny, but felt like it was a little too smart for the show we were watching.

Our call: FLOW IT. Melissa Barrera’s performance will please the viewers of Keep breathing, but the show is also aided by the brevity and tight plot of the episodes.

Joel Keller (@joelkeller) writes about food, entertainment, parenting and technology, but he’s not kidding himself: he’s a TV junkie. His writing has appeared in the New York Times, Slate, Salon, RollingStone.com, VanityFair.comFast Company and elsewhere.

The Bharat Express News - August 19, 2022 0
With new federal regulations coming into effect next week for so-called "ghost weapons," companies that sell the untraceable firearms are racing to unload the...