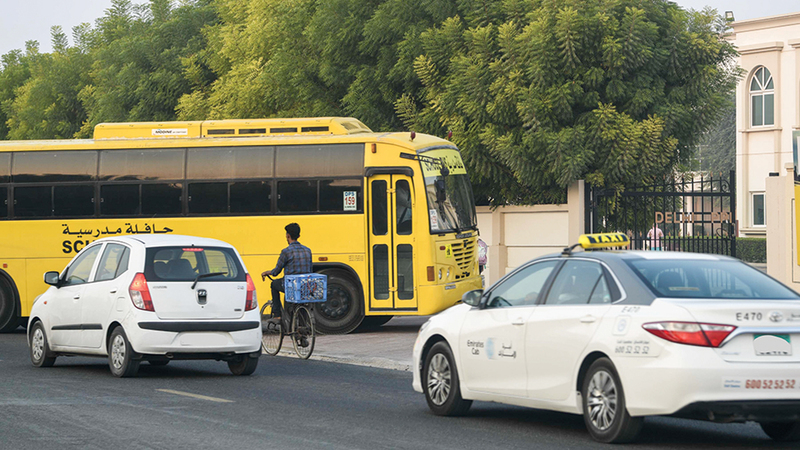 “Fingerprint time at work, and crowded roads leading to schools,” reasons cited by parents as a justification for dropping off their children in areas designated for pedestrian crossing, without accompanying them, and sudden stops in front of school entrances to drop off their children, obstructing through their wrong behavior the flow of traffic, and endangering the safety of their children risk.

While the traffic rules confirmed that the crossing of students alone, through the areas designated for pedestrian crossing, especially those under 10 years old, is extremely dangerous, as every child who crosses these vital streets alone is a potential victim of a run-over accident, given his young age, and his inability to distinguish Good time to cross.

In detail, the guardian of a student in a private school in the Emirate of Fujairah, Muhammad Fadel, said: “Although the traffic authorities have intensified their presence in front of schools during the morning and evening periods, a number of parents still violate traffic rules in the area designated for parking, especially during the morning period. As a result of their work schedules linked to a specific time for the electronic fingerprint.

He added that these practices, which are represented in the sudden stopping of dropping off students or random stops, are the reason for their delay in reaching their work sites in time, as a result of their irregularity and their adherence to sound traffic rules.

Omar Al Balushi, the guardian of students in a private school in the Emirate of Fujairah, supported her opinion, saying that “the traffic congestion in the roads leading to schools during the morning period begins at the time that coincides with the arrival of school buses,” stressing that he advanced the time of his arrival to school by only half an hour. He was surprised by the smooth flow of traffic on these roads and in front of the school entrance.

For its part, the management of a private school in the Emirate of Fujairah, which teaches the British curriculum, stated that it allocates six employees to organize traffic on a daily basis, from six thirty in the morning until the closing time of the school’s external gates, noting that the movement organizers are being trained on how to organize traffic in front of the school.

She emphasized that the safety of students is the priority that all traffic organizers work on, so that they are trained to make way for students to cross, and to alert vehicle drivers to the need to stop completely until they cross the main roads in front of the school, and the secondary roads that are usually in the parking space until they reach the school. School entrance.

For her part, the lawyer and legal advisor, Moza Masoud, confirmed that letting a child cross the street, even from places designated for crossing, is considered a crime against him, given that his life is endangered, whether by causing him a disability as a result of a run-over accident or his death, noting that the child protection laws came To protect children from any danger.

She indicated that the penalties that have been set are fair, to take into account the right of the child who was neglected and caused his harm or death in any way, as the Child Protection Law stipulates that he shall be punished with imprisonment from one month to three years, or a fine of no less than 5000 dirhams, whoever Endangering the safety of the child, or accustomed to leaving him without supervision or follow-up, and taking him to places that may threaten his life or negatively affect his health, such as places of smoking or the emission of toxic gases and the manufacture of weapons, in addition to places where various diseases and epidemics spread.

Masoud added that the law criminalizes every action or omission that would lead to harm to the child, preventing his upbringing and development in a sound, safe and healthy manner, including the failure of the parents or the caretaker of the child to take the necessary measures to preserve his life and physical safety. She stated that the Traffic and Patrols Department at the Fujairah Police General Command strengthens its programs to preserve the safety of students from traffic accidents by launching traffic campaigns, in which they focus on preserving the safety of students, noting that the safety of students is a shared societal responsibility among all sectors concerned with providing traffic safety for students.

ALSO READ  Frankly speaking to patients.. a “prescription” that is not dispensed in pharmacies

• Despite the fact that the traffic authorities have intensified their presence in front of schools, parents are still violating traffic rules.

• 5,000 dirhams fine and imprisonment from one month to 3 years as a penalty for endangering the safety of a child.

• Every child crossing vital streets alone is considered a potential victim of a run-over accident due to his young age.

Protecting children from the dangers of traffic accidents

The Traffic and Patrols Department at the Fujairah Police General Command confirmed that the competent authorities and concerned parties are working intensively to ensure that children are protected from the dangers of traffic accidents, in accordance with the provisions of the Traffic and Traffic Law and the laws amending it, in accordance with what was stated in Article 58 of Federal Law No. 3 of 2016 regarding the Human Rights Law. Child, which stipulates the prohibition of children under the age of 10 from sitting in the front seats of all types of vehicles.