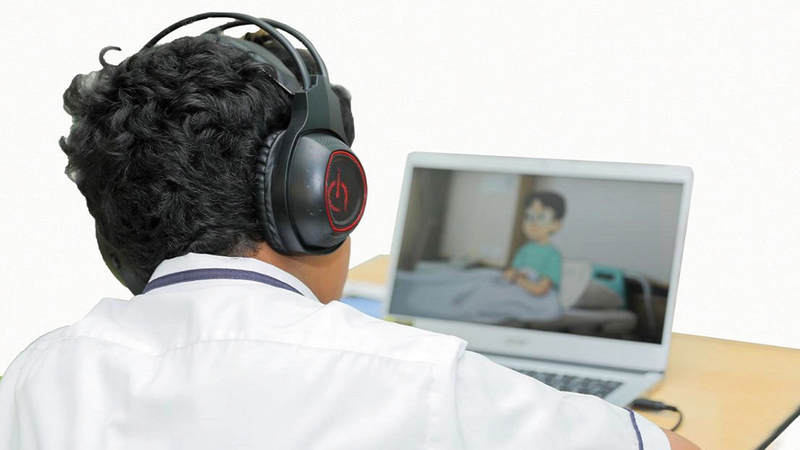 Students of the educational stages in a number of public and private schools in the Eastern Province, the Emirate of Fujairah and its affiliated regions, organized distance education classes on the “Times” program, yesterday, after the school administrations converted the education system from physical to “distance”, based on directives. The concerned authorities are taking caution and caution, given the expected tropical condition that the region will witness.

School administrations stated that they had contacted the Emirates Transport Corporation, the East Coast branch, to circulate the decision to convert the education system from physical to “distance” according to the expected weather, with the aim of preserving the security and safety of students, and avoiding any risks to them, especially in areas near valleys.

And the text of the e-mails addressed to parents of students from government and private school administrations stated, “According to the directives of the competent authorities, given the possibility of bad weather, the learning pattern in the school for all students will be distance learning for Friday, January 6, and please activate the students’ account on The (Times) program and preparing the appropriate place, while adhering to the terms and instructions of the school’s distance education system.

For its part, the competent authorities in the eastern region and the Emirate of Fujairah announced their readiness to move immediately to deal with the expected tropical situation, through concerted efforts between the concerned authorities, represented by the Eastern Region Police, Fujairah Police, Civil Defense and municipalities, adding that they held their meetings yesterday, to activate emergency plans for the situation. The expected tropical storm, which is represented by the accumulation of cumulus rain clouds over some western coastal areas and the sea, accompanied by brisk and sometimes strong winds.

The security authorities and municipalities of the eastern region issued weather warnings and instructions.

The Fujairah Police General Command and the Eastern Region Police also deployed intensive patrols on the coasts of the Emirate of Fujairah, the eastern coast, and the areas where the valleys flow, and called on drivers to stay away from the streams of the valleys, and to avoid going to the sea and places where water collects, in order to preserve their safety.

ALSO READ  Targeting children with obscene materials.. a means of luring and blackmailing them electronically

The head of the Municipal Affairs Department in the Emirate of Sharjah and the Eastern Region, Sulaiman bin Abdullah bin Sarhan Al Zaabi, confirmed the meeting with the municipalities of the Eastern Region (Municipality of Khorfakkan, Kalba and Dibba Al-Hisn) to discuss preparations for the rainy season, and discuss works and issues related to preparing for any air emergency, while intensifying the work of emergency teams. And rain in the eastern region.