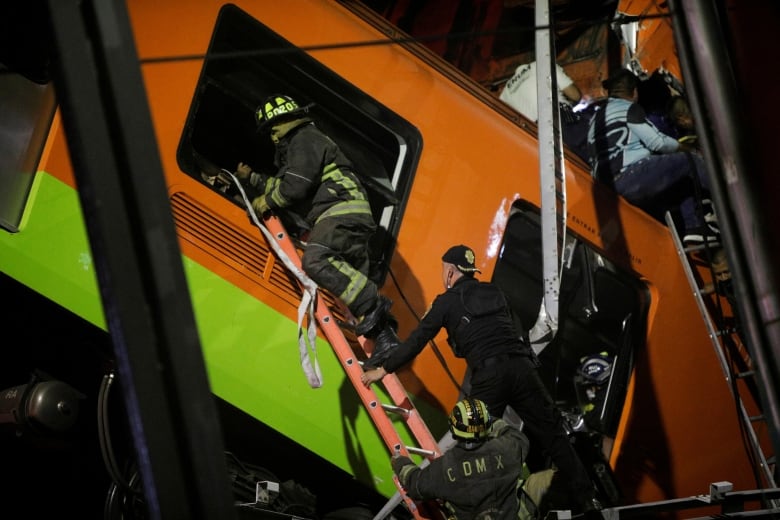 A Mexico City metro viaduct collapsed Monday evening, sending a train plunging towards a road, trapping at least one car under the rubble and killing at least 15 people, authorities said.

Mayor Claudia Sheinbaum said 70 people were injured, including 34 hospitalized, and people could still be trapped inside the train, which was split in two and appeared to be partially suspended.

The video showed a car bomb under the rubble, with dozens of rescuers searching the wreckage of the collapsed structure. The viaduct was about five meters above the road in southern Mexico City.

“A support beam gave way,” Sheinbaum said, adding that the beam collapsed just as the train passed over it.

Rescue efforts were briefly halted at midnight as the partially suspended train was “very weak” and a crane had to be brought in. There were still people stuck inside the train, although “we don’t know if they’re alive,” Sheinbaum said.

The accident occurred on metro line 12, the construction of which was marred by complaints and accusations of irregularities.

“What happened in the metro today is a terrible tragedy,” tweeted Mexican Foreign Minister Marcelo Ebrard.

Mexico City’s metro, one of the largest and busiest in the world, has had at least two serious accidents since it opened half a century ago.

In March last year, a collision between two trains at Tacubaya station left one passenger dead, injuring 41 people. In 2015, a train that did not stop on time crashed into another at Oceania station, injuring 12 people.