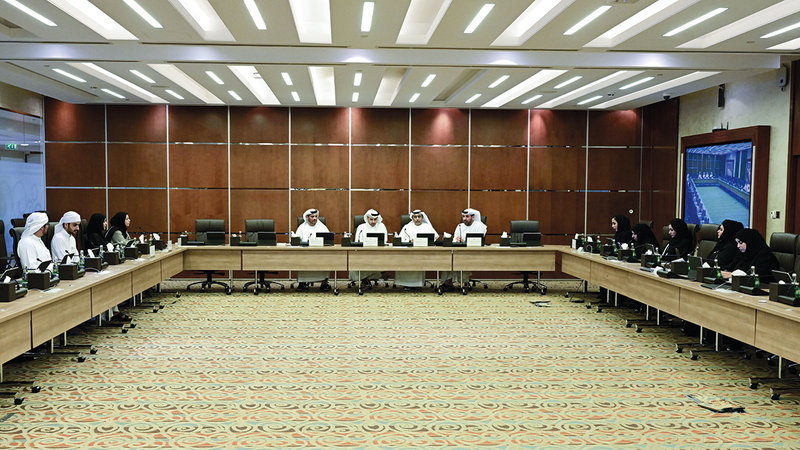 Citizens and a number of members of the Federal National Council submitted proposals to develop the national service project, the most prominent of which is to adopt distance learning during the period of national service, to facilitate the conscript who joined it after high school, receiving his education while performing it, so that he does not interrupt education for a long period.

This came during a panel discussion held yesterday by the Defense, Interior and Foreign Affairs Committee of the Federal National Council, entitled “Developing the National Service System”, at the headquarters of the Council’s General Secretariat in Dubai, as part of the committee’s work plan to discuss the topic of “National and Reserve Service Authority Policy”.

The members of the committee participated in the panel: Marwan Obaid Al Muhairi, who moderated the discussion, Ahmed Hamad Bushhab, Obaid Khalfan Al Salami, and Youssef Abdullah Al Batran. The second vice-chairman of the Council, Naameh Abdullah Al Sharhan, and member of the Council Sarah Muhammad Falaknaz, participated virtually in the discussions.

The committee will discuss the outcomes of the panel discussion with representatives of the Ministry of Defense at a later meeting, to include it in its final report, which will be discussed in the council in the presence of government representatives.

The Defense, Interior and Foreign Affairs Committee discusses the general issue according to axes: the authority’s strategy and the mechanism for developing the national and reserve service system, the challenges in joining the national service on jobs and continuing the education of students in higher education institutions, and complementary work and benefiting from alternative service in the field of training for vital jobs.

Council member Naameh Al-Sharhan said, “There is a long period of interruption for the student who joins the national service, after completing high school, until he returns to university studies.”

She added, “The national service program is a factory for men, and this was evident on the national cadres who performed the service, but at the same time, an educational aspect must consider addressing the student’s dropout from school, because the nature of the cumulative information or skills that the student acquired during the years of study in education The year (pre-university), you need to grow at the university level, and then distance study can be adopted during the period of national service.

A member of the Federal National Council, Sarah Amin Falaknaz, spoke about several proposals, most notably that recruits from school graduates who did not obtain 90%, join the national service, and then they move away from education for the period of national service, which is considered long in relation to continuing education, proposing To cooperate with educational institutions, so that students affiliated with the national service study the basic subjects that enable them, when they enter the university, to pass these subjects. For her part, the Director of the Training Department at the Ministry of Human Resources and Emiratisation, Fatima Al-Houti, appreciated the efforts of the National Service Authority, which promotes many positives in the hearts of the countrymen, suggesting that the period of national service include an aspect of vocational training for its employees, pointing out that its adoption is part of the service program Patriotism, comes in order to support the involvement of national cadres in the labor market. She stated that it is possible to benefit from the ministry’s policy in this regard, especially through the “Nafes” program approved by the ministry, and it focused on holders of university qualifications, and then expanded to include graduates of high school and technical institutes.

The Director of the Employment Department at the Ministry, Fatima Farhan, said that the most prominent points that require consideration are the refusal of employers in the private sector to hire the national cadre, except after he finishes performing the national service, so that he does not stop working after employment to perform the service. Muhammad al-Hassam, one of the young citizens who recently completed national service, suggested conducting fitness tests for applicants to perform national service, before joining the program, and organizing introductory lectures for them before the start of the recruitment course.

Walid Al-Zaabi, one of the participants in the panel discussion, suggested expanding the benefit from the various professions of many recruits during national service, as is the case during the “Expo 2020 Dubai” period, when a number of them were used in this major event.

Employers in the private sector refuse to hire a citizen, unless he has completed his national service.