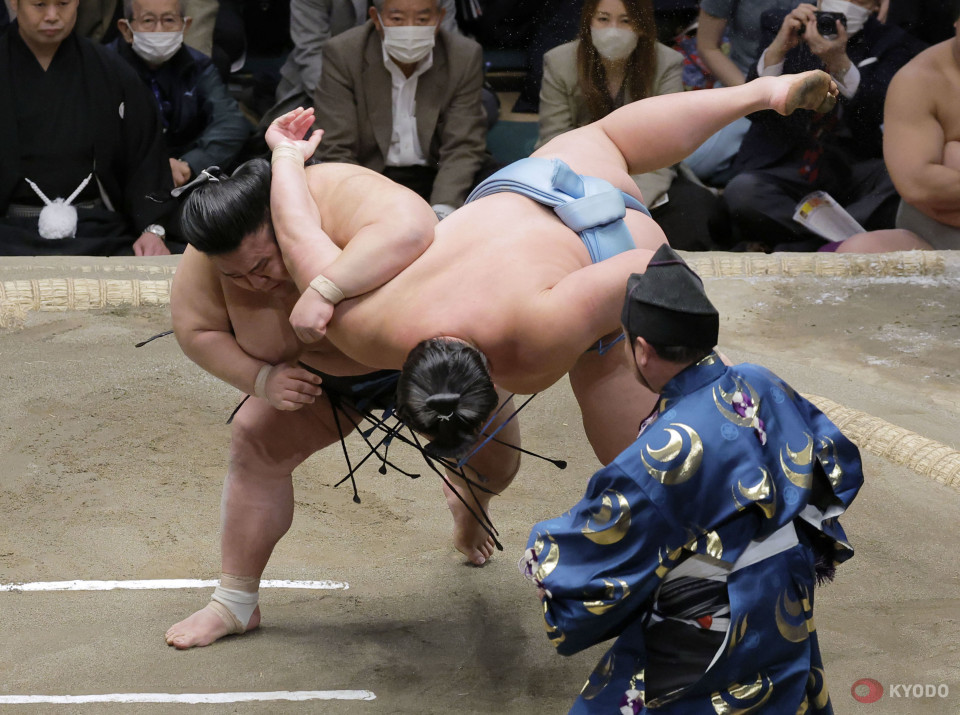 The top-ranked competitor while Yokozuna Terunofuji remains sidelined after surgery, Takakeisho captured his third career Emperor’s Cup with a 12-3 record by knocking out unlikely contender Kotoshoho, fighting as a 13th-ranked maegashira.

With the two alumni of famed sumo factory Saitama Sakae High School tied for the lead after the penultimate day, organizers planned for them to face each other for the trophy in the final match of the 15-day encounter at Ryogoku Kokugikan.

The ozeki was strong off target, knocking the underdog back and rolling him to the side before finishing him off with an unstrapped arm throw.

“As an ozeki in this position you are expected to win, but I turned that pressure into energy and inspiration,” said Takakeisho, who finished second in November.

“Once I got on the ring I knew I had to give it my all, but I also felt I was here thanks to the support of so many people, including my family.”

The winning technique was a departure from the power pushing and punching that was Takakeisho’s bread and butter. It represented an extensive repertoire of moves from the 26-year-old, who could qualify for Yokozuna promotion after winning his first title since November 2020.

“I wasn’t able to get my training under control and in many cases I was just one win short of a title, so it was all very disappointing,” he said. “Now I finally feel like I’ve been able to show my worth with this championship.”

The 23-year-old Kotoshoho, who had not set a winning record since March, closed his best result in the top division with his first Fighting Spirit Prize.

Sekiwake Hoshoryu (8-7) was fortunate enough to maintain his spotless streak of winning records as a member of the premier “sanyaku” ranks when No. 8 Onosho (10-5) was penalized for grabbing the Mongol by the hair as he knocked him to the ground. clay.

A title contender until the penultimate day, Onosho needed to win the fight to claim his fourth Fighting Spirit award.

Sekiwake Wakatakakage showed his impressive speed and power to knock down No. 5 Nishikigi with both wrestlers finishing 9-6.

Former ozeki Shodai continues to slide down the rankings after finishing 6-9 in his first meeting since relegation to sekiwake. The one-time winner of the Emperor’s Cup was forced out by No. 6 Myogiryu (6-9).

Mongolian komusubi Kiribayama cemented his promotion case with an 11-4 record and a first technique award after his force win over No. 5 Ryuden (9-6).

Komusubi Kotonowaka (8-7) set a winning record in his sanyaku debut by bulldozing No. 6 Hokutofuji (7-8). 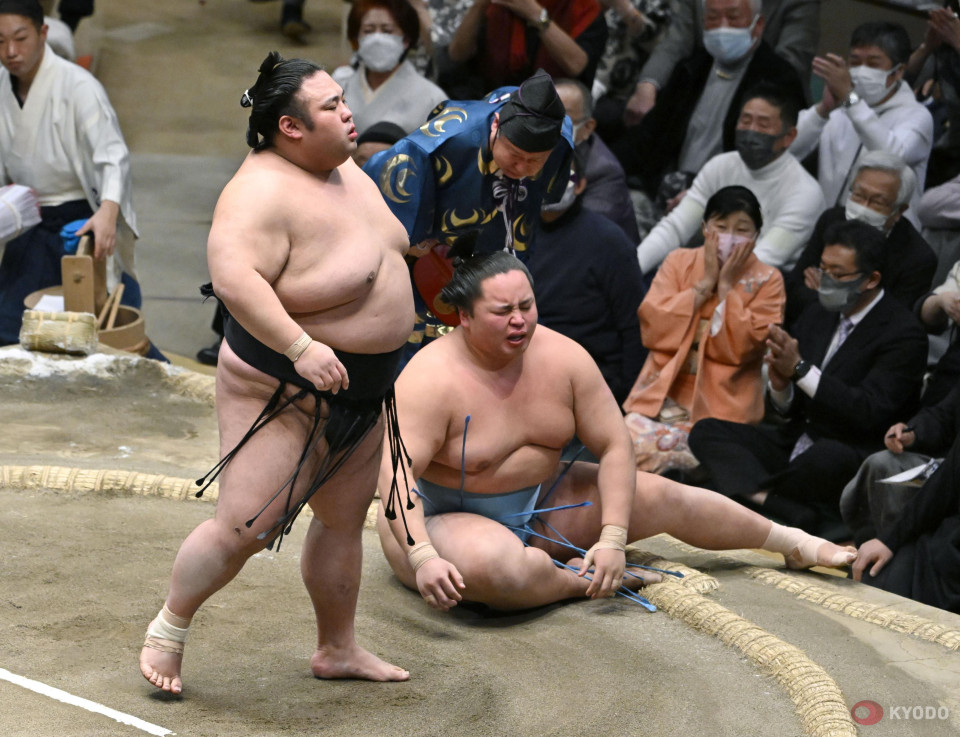 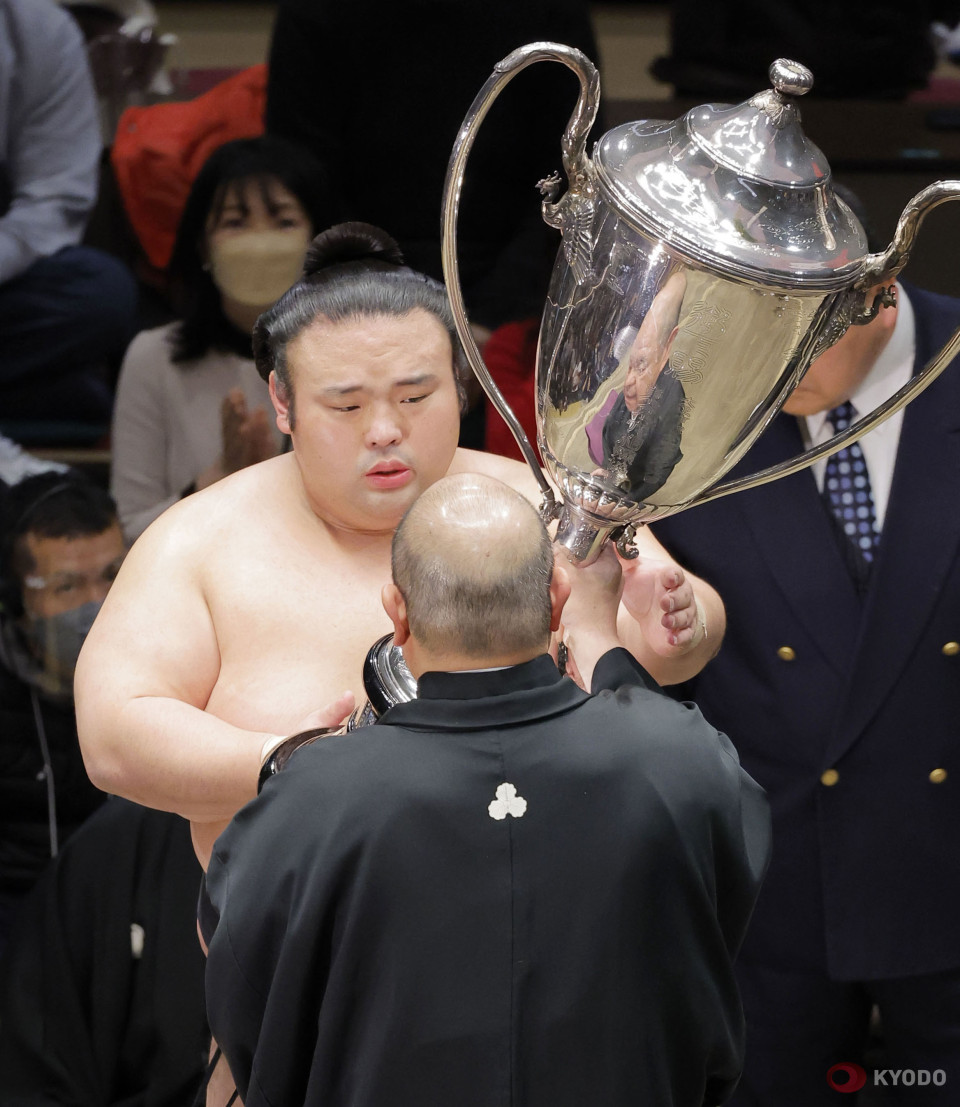