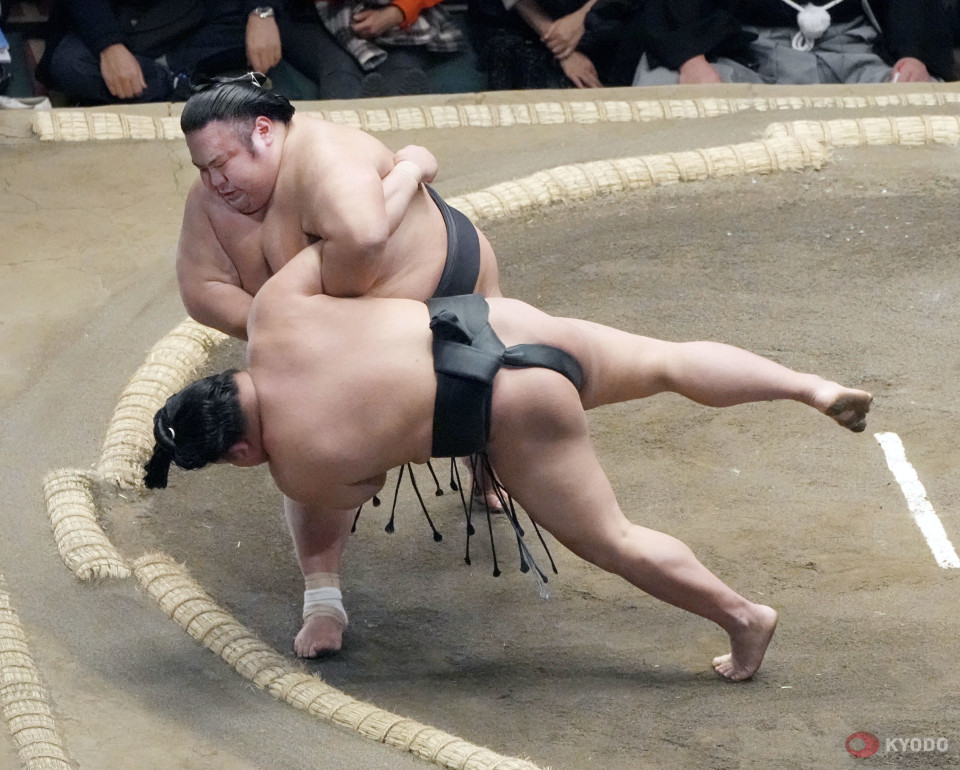 Sole ozeki Takakeisho survived a hard-fought battle with third-seeded maegashira Midorifuji on Saturday to tie for the lead in the New Year Grand Sumo Tournament.

With the first week of the 15-day tournament in the books, the top-ranked rikishi share the top four ranks 6-1 in the absence of Yokozuna Terunofuji.

In a thrilling Day 7 Final at Ryogoku Kokugikan, Takakeisho was taken out of his comfort zone by rising talent Midorifuji (4-3), who escaped a pushout before throwing round punches with the ozeki.

As Midorifuji came in for the kill, Takakeisho grabbed hold of the attacking maegashira and tumbled him with an unusual throw with the armlock.

Former sekiwake and current No. 1 maegashira Daieiisho recorded a victory to retain part of the lead, as did No. 8 Onosho, No. 10 Aoiyama and No. 13 Kotoshoho.

Sekiwake Shodai, demoted from ozeki after posting a losing record in November, dropped to 2-5 after being knocked out by No. 2 Tamawashi (4-3). He now needs to win all of his remaining eight matches to be automatically promoted back to the second highest rank.

No. 3 Abi (5-2) drove Hoshoryu to the straw with punches to his upper body before the talented 23-year-old circled back in to execute a force.

Sumo: Takakeisho defeats Abi and creates an 8-way logjam at the top of the leaderboard