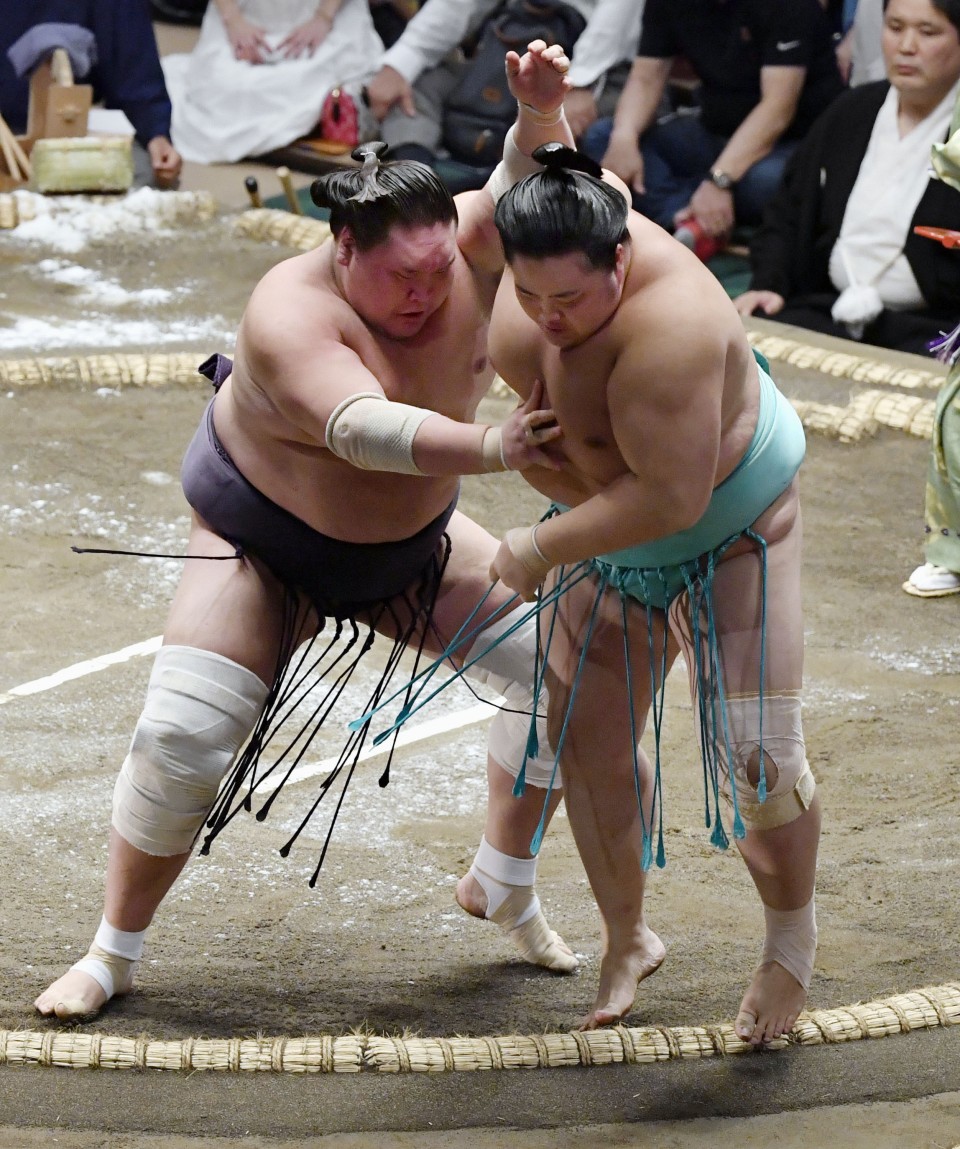 Sole yokozuna Terunofuji took a solid victory on Tuesday, the third day of the Autumn Grand Sumo Tournament, a day after being knocked out of the leading group by an upset defeat.

Unable to hold a leash from the start, the yokozuna locked up the arms of No. 2 maegashira Kotonowaka and used his leverage to force him backwards. Kotonowaka (1-2) tried to slip away and surround the yokozuna, but Terunofuji held his opponent straight in front of him and pushed him out.

Struggling as the demotion-threatened “kadoban” ozeki who needs eight wins here to maintain his spot in the sport’s second-highest rank, Mitakeumi suffered his first defeat.

No. 2 Meisei (2-1) wrapped the ozeki’s arms with his opener, forced him to the straw and pushed him out.

Mitakeumi’s defeat left six maegashira wrestlers out of the way with three wins at the 15-day tournament at Ryogoku Kokugikan in Tokyo.

Ozeki Shodai (1-2) suffered his second consecutive loss, outclassed and forced out by the much smaller No. 1 Midorifuji (1-2).

“I was so nervous, but my equerry said to me, ‘Nervous or not, just struggle for all you’re worth,’ and I could just react without thinking,” Midorifuji said.

Ozeki Takakeisho took his second straight win after a loss on opening day, driving Tobizaru (1-2) back to the straw before a powerful thrust sent the tricky No. 1 flying back into the seating area.

New sekiwake Hoshoryu (2-1) knocked out July’s champion, komusubi Ichinojo (1-2) with a trip to the outside leg. Ichinojo fended off Hoshoryu’s first trip attempt, but couldn’t keep the sekiwake to himself.

The nephew of the former Yokozuna Asashoryu, Hoshoryu continued to maneuver to Ichinojo’s side and overthrew him on his second attempt.

ALSO READ  Queen Elizabeth, one of the world's longest-reigning monarchs, dies at age 96

Sekiwake Daisho fell to an embarrassing second defeat when the round 1.75-meter No. 2 Ura (2-1) tricked him into launching himself out of the ring. Ura lured Daieisho to defeat by pulling back and stepping to the side as the sekiwake charged forward at full speed.

Wakatakakage fell to 0-3 in his fourth tournament as sekiwake, forced out by new Mongolian komusubi Kiribayama (2-1).