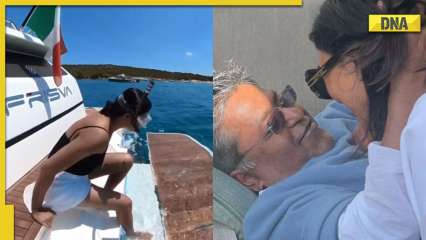 In this video you can see Sushmita looking attractive in a white skirt on a black monokini. Sushmita channeled her inner mermaid and captioned the moment by saying, “Align, pause, breathe…let go!!!…A lesson in surrender, as I experience the gentle embrace of the Mediterranean! Beautifully captured @itsalways. Where life has depth…I’m all for it!! I love you!!! #duggadugga.”

As soon as Sushmita dropped the video, several netizens responded to her post. But the comment that caught our attention was about her beau Lalit Modi. The businessman commented: “looks good in Sardinia (emoji with smiley and kiss)” “Just like a beautiful mermaid,” wrote another user. A netizen added: “Love the video and caption.”

Last week she dropped her sexy photos from her vacation in Sardinia. The actress shared the photos and wrote a strong message on Instagram. In the photos, the actress can be seen posing on a yacht, wearing a leopard print Kaftan. Dropping her photos, the actress wrote: “Woman has an attitude!!! Yay, a really good one!!! #strikeapose #clickclick I love you!!! #duggadugga #yourstruly.” Charu Asopa, Sushmita Sen’s brother Rajeev Asopa’s estranged wife, dropped the heart below the post.

ALSO READ  The Gray Man: Dhanush talks about his intense role as Avik San, saying 'whether it's romance or sad scenes...'

Sushmita Sen has become the new target of netizens. Ever since she accepted her relationship with IPL founder Lalit Modi on the public platform, she has been under heavy scrutiny for everything. Recently, Biwi No 1 star posted her photo on Twitter with the caption, “I love you guys.” As soon as she posted the photo, users saw vodka bottles reflected in her photo and brutally trolled her.