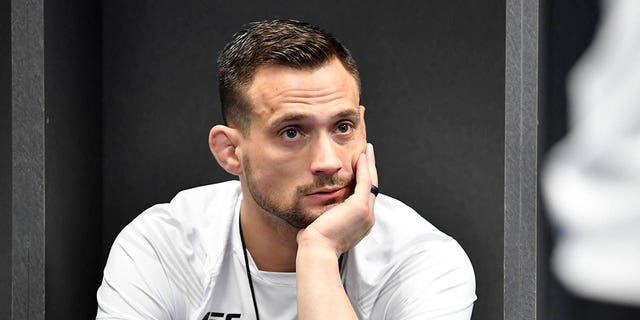 A suspended mixed martial arts coach has acted as an agent for an offshore gambling site, according to a report.

James Krause was suspended on Nov. 18 after suspicious line moves in a fight involving one of his students — and it turns out that Krause was a middleman for an offshore sportsbook, people who allegedly placed bets with him told ESPN.

Krause was an agent for a Costa Rica-based online sportsbook, and he provided bettors with a line of credit and credentials.

Multiple government agencies are investigating a November 5 fight between Darrick Minner, coached by Krause, and Shayilan Nuerdanbieke, after Minner became a massive underdog just hours before the fight. Both legal and illegal sportsbooks saw unusual betting interest that Minner would lose in the first round and the fight would last less than 2.5 rounds. He lost by TKO just over a minute into the fight.

James Krause poses on the scales during the UFC 247 ceremonial weigh-in at the Toyota Center on February 7, 2020 in Houston, Texas.
(Mike Roach/Zuffa LLC via Getty Images)

Both Krause and Minner were suspended for failing to list an injury on Minner’s pre-fight medical questionnaire. Minner later said he had a minor knee injury, but doctors later revealed he had torn ligaments.

UFC did not ban fighters or their teams from betting on fights, including their own, until October.

Krause has been open about his gambling, telling “The MMA Hour” podcast that he bets on “just about every fight.” He provides betting tips in a Discord where he has about 2,000 subscribers. His gambling podcast has aired on UFC Fight Pass.