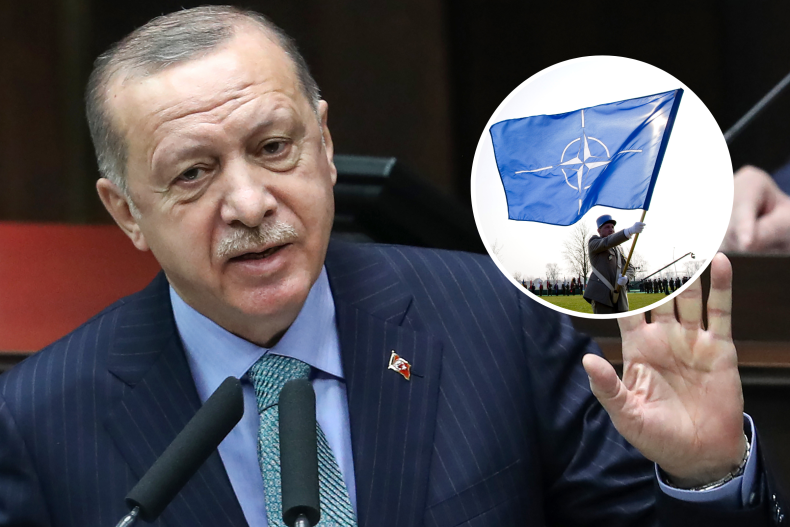 The invasion of Ukraine by Russian President Vladimir Putin last February prompted Sweden and Finland to push to join NATO, a military alliance of European and North American countries. Both countries would need unanimous support from current NATO member states to gain entry, but Turkey has expressed concern over what it sees as their lax attitude towards militants from the Kurdistan Workers’ Party (PKK), which Turkey considers a terrorist organization. organization.

Tensions between Turkey and Sweden have risen in recent weeks amid far-right and Kurdish protests in Stockholm. One protest, in which a far-right politician burned a Quran, Islam’s holy book, led to strong rebukes from Turkey.

“Those who allow such profanity in front of our embassy can no longer expect our support for their NATO membership,” Erdogan said Monday, according to Reuters.

He added: “If you love and protect members of terrorist organizations and enemies of Islam so much, then we recommend that you seek their support for the security of your country.”

According to the The Bharat Express News, Erdogan said Sweden’s NATO membership “is not going ahead”.

US State Department spokesman Ned Price told Reuters that “this is a decision and consensus that Finland and Sweden will have to reach with Turkey”. Still, it did not say whether US authorities believe the dispute will lead to Sweden being permanently excluded from the alliance.

It remained unknown whether the incident would affect Finland’s membership.

Turkey, Sweden and Finland seemed to be making some progress in the months leading up to the latest protest. In June, they agreed on a deal that cleared the way for their membership.

ALSO READ  The dismissed employees of Twitter have asked for the lawsuit about dismissal to be dropped, the judge rules

The deal addressed Erdogan’s security concerns and pledged “unwavering solidarity and cooperation in the fight against terrorism, in all its forms and manifestations, which poses a direct threat to the national security of allies and to international peace and security.”

Vladimir Putin would be one of the beneficiaries of Sweden blocking NATO membership.

Putin has argued against the expansion of the coalition, which he says encroaches on Moscow’s influence amid former Soviet republics and Eastern Europe. In the months leading up to the invasion of Ukraine, Putin condemned the possibility of Ukraine joining the coalition.

However, Ukraine’s membership currently lacks the support of NATO member states, including the United States, which has raised concerns about political corruption in Kiev.

Moscow has threatened retaliation if Sweden and Finland join NATO. Putin has also said that “extending military infrastructure to this area would certainly provoke our reaction”.