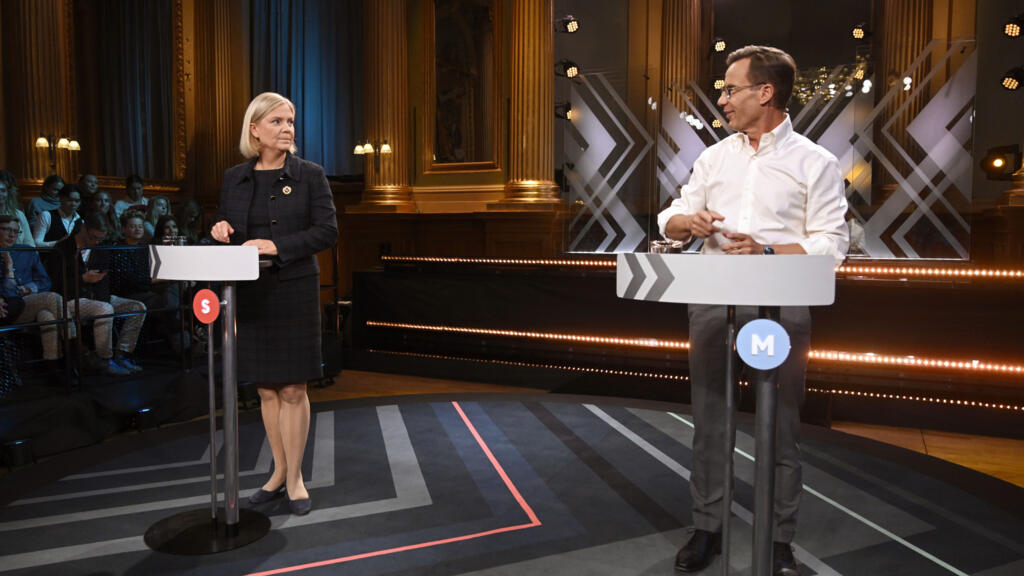 Sweden will vote on Sunday in parliamentary elections that will either pave the way for an unprecedented right-wing government backed by the far right or a third consecutive mandate for the ruling Social Democrats.

The right-wing bloc has never before agreed to cooperate with the nationalist and anti-immigration Swedish Democrats, who until recently were treated as “outcasts” by other political parties.

The far right has jumped to second place behind the Social Democrats in the final weeks of the campaign, accounting for about a fifth of the vote.

Their surge — overtaking the traditional leaders of the right-wing bloc, the conservative moderates — has been attributed to an election race focusing on issues close to their voters, including crime, segregation and immigrant integration.

However, Prime Minister Andersson, 55, hopes to stay in power with the support of the small left, center and green parties.

Speaking to reporters on the eve of the vote in Stockholm’s underprivileged suburb of Rinkeby, she said she hoped the campaign had convinced voters “that the Social Democrats are a party for ordinary people, for workers, with good safety nets, good jobs and a bright future.”

“It’s a very close race, so it’s up to the Swedish people to decide,” she added.

Andersson, whose party has dominated Swedish politics since the 1930s, enjoys broad support among Sweden.

She has consistently beaten her challenger for the post of Prime Minister, Ulf Kristersson, leader of the moderates, by a wide margin in opinion polls.

Kristersson is the architect behind a large U-turn for the right wing.

He started exploratory talks with the Swedish Democrats in 2019 and deepened their cooperation before the other two small right-wing parties, the Christian Democrats and to a lesser extent the Liberals, followed suit.

“As it stands, we have two pretty clear blocks,” political scientist Katarina Barrling told TBEN, noting that it should be fairly easy to predict the next prime minister after election night.

However, both blocs are plagued by internal divisions that could lead to arduous negotiations to build a coalition government.

“There are multiple red lines for the parties within the blocs that can disrupt the process,” Barrling said.

The previous 2018 elections ended in a political stalemate that lasted four months until the Social Democrats managed to form a minority government.

That would be a nightmare scenario this time.

In addition to a looming economic crisis with inflation and rising energy prices, Sweden is currently in the delicate process of joining NATO and will take over the EU presidency in 2023.

“The pressure to have a united and effective government is greater today than in the last election,” Barrling noted.

The end of the Swedish Democrats’ political isolation and the prospect of it becoming the largest right-wing party is “a huge shift in Swedish society,” said Anders Lindberg, editor-in-chief of left-wing tabloid Aftonbladet.

ALSO READ  The debate - 'Sanctions remain': how does Europe plan a winter without Russian gas?

The strong result in opinion polls this time comes as Sweden struggles to fight escalating gang shootings blamed on battles over the drug and weapons markets.

The country now tops the European statistics for gun deaths.

While the violence was once confined to locations frequented by criminals, it has spread to public spaces such as parks and shopping malls, raising concerns among ordinary Swedes in a country long known for being safe and peaceful.

In one of the campaign’s final debates, Kristersson attacked the Social Democrats for doing “almost nothing” to govern gang violence since coming to power in 2014.

But Andersson, who took over as prime minister just nine months ago after seven years as finance minister, said she was just getting started.

“I now ask for the mandate of the Swedish people to show what I can do with four years.”