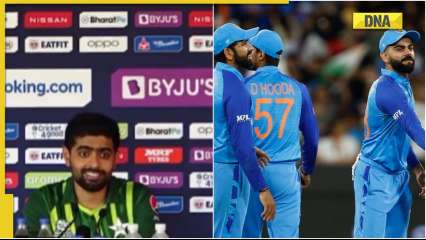 Team India’s 10-wicket loss at the hands of England in the semi-final of the 2022 T20 World Cup saw the Indian players and management come under heavy criticism from various quarters. Aside from former Indian players, Pakistani Prime Minister Shehbaz Sharif also launched a brutal dig at the Men in Blue.

Ahead of the T20 World Cup 2022 final between Pakistan and England, Babar Azam and Jos Buttler attended the pre-match press conference in which the Pakistani skipper was questioned about Sharif’s tweet, to which he replied that he hadn’t heard the tweet until now. seen.

After Rohit Sharma’s men suffered a 10-wicket defeat to England in the second semi-final on Thursday, the Pakistani Prime Minister took a dig at the Indian team and reminded them of the two teams that defeated the Men in Blue by 10 wickets in the T20 World Cup history.

Aside from England, Pakistan was the only side to have achieved such a feat against India at last year’s T20 World Cup.

So this Sunday it is:

“So this Sunday it’s: 152/0 vs 170/0 #T20WorldCup,” Sharif wrote on Twitter. When questioned about this by The Bharat Express News correspondent Kapil Vashisth, Babar had a rather reserved answer.

“After India’s defeat in the semi-final, Pakistani Prime Minister Shehbaz Sharif tweeted 152-0 vs 170-0 on Sunday, when a country’s prime minister tweets this, is there extra pressure on the team?” Kapil asked, to which the Pakistani skipper replied that there was no extra pressure.

“No, I don’t think there’s any extra pressure, actually, sorry to say I haven’t seen this tweet yet, and I’m not aware of this, but there’s no extra pressure, we’re just trying our best do no matter to the opposition,” said Babar.

Pakistan was on the brink of being eliminated from the T20 World Cup, but after three consecutive wins and a helping hand from the Netherlands beating South Africa, Babar Azam and Co qualified for the semi-finals, beating New Zealand by 7 wickets.

England defeated the Men in Green on both occasions in 2009 and 2010, when they last met in T20 World Cup history.