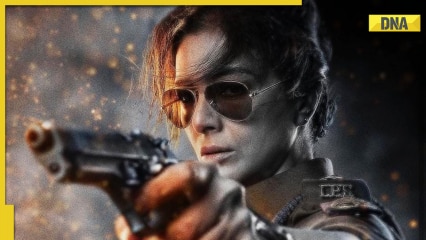 Tabu has revealed the first look of her character from the upcoming action thriller Bholaa. The film stars Ajay Devgn and is also directed by him. Tabu plays a police officer in the movie, and the actress took to her social media on Tuesday to share the first look. Bholaa is the official remake of the 2019 Tamil hit Kaithi.

Tabu shared a carousel post with two photos of her character’s appearance. In the first picture she was in her uniform and with glasses pointing a gun at the camera while looking glumly ahead. The second picture showed Tabu’s profile with her gun still in her hand and hair falling on her face. Her badge with the name Diana was also visible.

In response to the post, one fan wrote, “Aag laga di (You set it on fire).” Another called Tabu the ‘savior of Bollywood’ and commented, “After Bhool Bhulaiyaa 2 and Drishyam 2, she comes up with another super hit”. Interestingly, Tabu played a cop in Drishyam 2, her latest release. One comment read: “Tabu as an agent is a genre.”

Bholaa stars Ajay Devgn in the titular role of a prisoner who finds himself in the crosshairs of a criminal gang and police and must protect the latter in an attempt to meet his estranged daughter. The film also features Amala Paul and Abhishek Bachchan in special appearances. The plot of the film is said to be different from the original Tamil Kaithi.