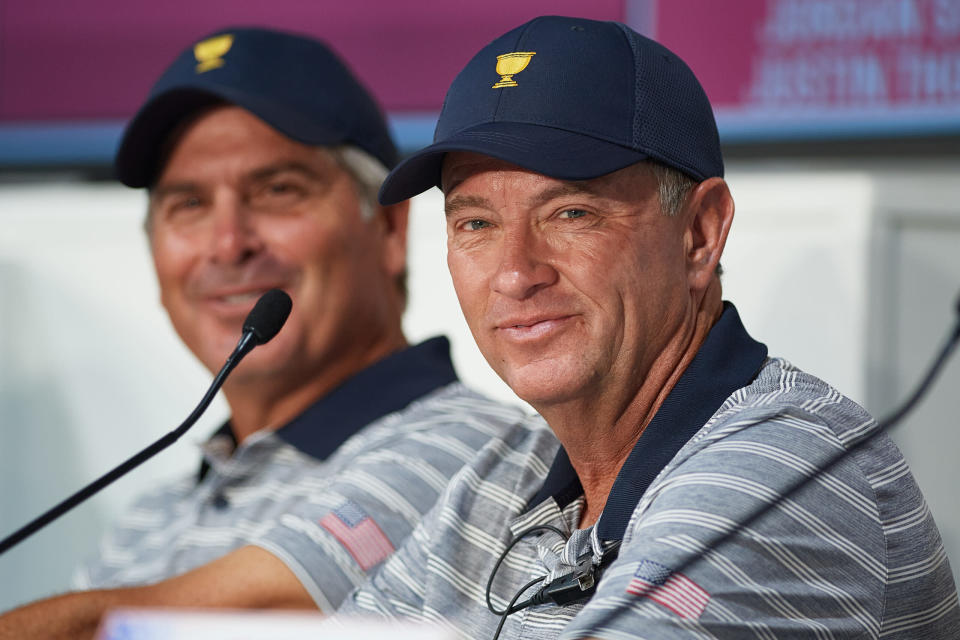 The World Golf Hall of Fame member, who has 21 PGA Tour titles to his name, including the 1997 PGA Championship, leads the US to the 2022 Presidents Cup.

“My history with this event going back to 1994 brings back indelible memories of competition, camaraderie and sportsmanship, and I am excited to lead the best American players to Quail Hollow Club,” said Love, 58, who was born in the Queen. City. “The US team has been led by some of the greatest players of all time since 1994 and I will do my best to continue that legacy as we strive to keep the Cup.”

In Love’s first attempt as captain in the 2012 Ryder Cup, the Europeans stormed back from a 10-4 deficit to win 14½-13½ in Medinah north of Chicago. Four years later, Love and the US avenged the crushing defeat at Hazeltine in Minnesota, winning 17-11.

As for the Presidents Cup, the US has dominated the Internationals, losing only once and drawing once in 13 games. The US holds the Cup after captain Tiger Woods led the Americans to a 16-14 win at the Royal Melbourne Golf Club in Australia in 2019.

The 2022 Presidents Cup contested at Quail Hollow Club in Charlotte, North Carolina is an ideal setting for the Tarheel that is Love.

“He has player respect through and through, experience in that venue and a man who is more willing to listen than speak from a leadership standpoint, if that makes sense. He is a good listener. He is the epitome of a selfless leader,” said two-time champion Zach Johnson. Johnson, who has played five times in the Ryder Cup and four times in the Presidents Cup, was an assistant to Woods in the 2019 Presidents Cup and joined Love as an assistant for the most recent Ryder Cup.

Johnson said many parties were involved in the decision to name Love, including PGA Tour commissioner Jay Monahan, the Ryder Cup committee and Tiger Woods.

ALSO READ  Who's playing at LIV Golf's Invitational in Chicago? How much can they win?

“The process of getting to this point was actually quite extensive,” Johnson said. “There was a lot of discussion. For the improvement of the Cup line-up, for the improvement of the team, this was the best option. Many individuals were involved in the process; it just got to the point where we all felt like Davis was the best option, given where we are, and to keep what we’ve already established and get some new blood as vice captains so we can be more selective and have more options in the future.

“Throw the ties to North Carolina and that neck of the woods. He’s a Tarheel at heart. Things just lined up.”

2008 South African and Masters champion Trevor Immelmann, who was named captain of the 2022 Internationals squad in April 2020, played in two editions of the Presidents Cup and was an assistant to Ernie Els in the 2019 Presidents Cup.

And the TBEN analyst said he has the utmost respect for his counterpart.

“He’s so accomplished in the game,” Immelman said. “On the track, his results speak for themselves and the longevity he has had at the highest level is truly fantastic. He is one of the nicest guys you could ever want to meet. Just a great man. The charity work he does with his family is huge. I have nothing but respect and admiration for Davis.

“He’s captained a couple of Ryder Cups, both emotional, with the first obviously having a bit of an accident Sunday in Medinah, but he made up for it a second time. Now he gets a shot at the Presidents Cup.

“Davis is popular wherever he goes, but to play that part in Charlotte many people will have their fingers crossed for him. And the better the atmosphere, the better the event. I’m really happy for him that he gets this opportunity.”

Love was a three-time All-America at the University of North Carolina.

“The Carolinas mean so much to me and my family, and it is humbled to know that I will return to Charlotte in this new role to continue the rich sporting tradition Queen City has developed over the years,” said Love. “Quail Hollow is one of the best golf tests we see all year on the PGA Tour, and it will be a perfect venue for a match play event given the variety of challenges it offers.

“I think you’ll see players take some risk-reward shots throughout the week, an exciting environment for fans on the ground and watching around the world.”

With help from above, Ryan TBEN wins Dunhill Links ahead of Warnie