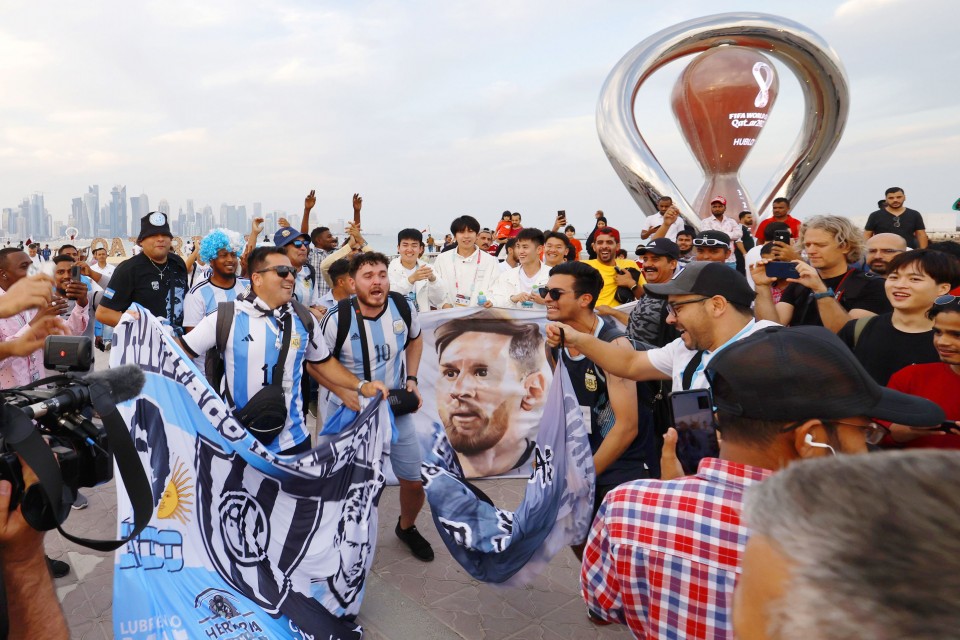 Argentine soccer fans and other people gather around the World Cup countdown clock in Doha, the capital of Qatar on November 17, 2022. (TBEN) ==TBEN

BANGKOK — Leaders of the Pacific Rim economies will wrap up their two-day talks in Bangkok on Saturday, aiming to release a statement from the leaders that will include opposing positions on Russia’s invasion of Ukraine.

At the 21-member Asia-Pacific Economic Cooperation forum summit, leaders are expected to agree on the importance of the clean energy transition while ensuring energy security, as well as promoting free and fair trade and investment , despite a split over Russia’s aggression.

Mori, a veteran prone to blunders, resigned as chief organizer of the Tokyo Olympics last year before the Games started after making sexist remarks.

TOKYO/BANGKOK — North Korea on Friday test-fired an ICBM-class missile believed to have fallen within Japan’s exclusive economic zone outside its northern territory.

The missile, which flew for about 69 minutes, could potentially travel more than 15,000 kilometers and reach the US mainland if fired on a normal trajectory, Japanese Defense Minister Yasukazu Hamada told reporters.

ALSO READ  Girl dies after spending most of the day in the car in Osaka Pref.

No alcohol offered near World Cup stadiums in Qatar: FIFA

DOHA – FIFA on Friday said no alcoholic beverages would be sold near stadiums during the World Cup final in Qatar, reviewing the policy two days before the opening of one of the world’s biggest sporting events.

The global soccer governing body said earlier that spectators and others could buy products made by Budweiser, a sponsor of the upcoming tournament finals, in areas around World Cup stadiums in the Muslim country where access to alcoholic beverages is strictly controlled.

JAKARTA – A magnitude 6.9 earthquake struck the southwestern part of the Indonesian island of Sumatra late Friday, though no casualties or damage were reported, disaster agency officials said.

The Jakarta-based Meteorological, Climatology and Geophysics Agency said there was no fear of a tsunami. The National Disaster Mitigation Agency said no casualties or damage have been reported, but it will continue to monitor the situation.

BANGKOK — Leaders of Japan, the United States and several other Pacific Rim economies condemned North Korea Friday at their Bangkok summit over Pyongyang’s launch of a suspected intercontinental ballistic missile.

On the first day of a two-day summit of the 21-member Asia-Pacific Economic Cooperation Forum, most leaders denounced Russia for invading Ukraine. Japanese and Thai officials.

TOKYO — An International Atomic Energy Agency official said Friday that a report due early next year on Japan’s plan to discharge purified radioactive water from the crippled Fukushima Daiichi nuclear power plant into the sea “will instill confidence in Japanese society, neighbors, all (IAEA) Member States.”

The report will be an independent and scientific evaluation based on international standards, Gustavo Caruso, director and coordinator of the IAEA Department of Nuclear Safety and Security, said at a news conference in Tokyo following the completion of the organization’s second safety evaluation.