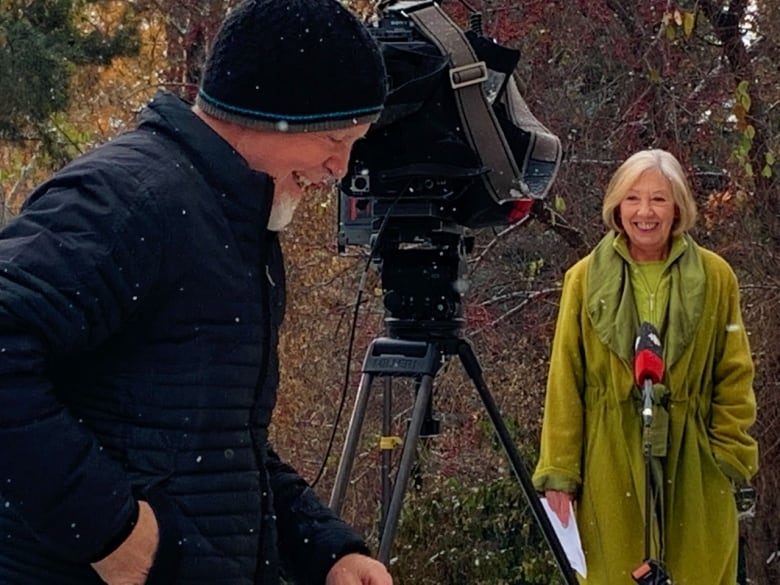 Born in London, Ontario, on March 2, 1960, Johnston died of cancer after a short illness.

Johnston covered Alberta courts and crime for over three decades and her dedication to the beat was unparalleled.

She is survived by her husband Scott Johnston, her daughter Samantha Milles, son-in-law Demetri Milles and her granddaughter Calliope (Cali).

In an interview on Friday, Samantha Milles said her mother excelled as a journalist from the start and always had an “electric spark” that drove her work.

“She was just a few months ago doing stories that she was still so passionate about and cared about so much. I really feel it was her calling to do the work that she did,” Milles said.

Johnston found meaning in telling the stories of justice delivered.

She continued her stories with determination, said Stephanie Coombs, TBEN Edmonton’s director of journalism and programming.

“Janice was the kind of journalist who lived and breathed the news,” said Coombs.

“She strongly believed in her role as a crime reporter to tell the public what was happening in the criminal justice system, both in the courts and behind the scenes. When something was secret and in the public interest, Janice wanted to dig deeper and bring it in the light.”

Coombs recalled working closely with Johnston on a 2021 investigative series in which a whistleblower police officer leaked untold information to Johnston.

“It was a testament to her reputation as an Edmonton journalist that she understood the story and was able to share it with the public,” she said.

Johnston was no stranger to the legislature or city hall, but the courthouse was her calling.

“She was the ultimate court reporter,” Beresh said. “She had such a great sense of capturing the story objectively. And what really struck me about her was her compassion…she was fierce but fair.”

Johnston brought the details of important cases to Edmontonians over the decades: the disappearance of St. Albert seniors Lyle and Marie McCann and the case of the so-called “Dexter killer” Mark Twitchell.

She traveled to North Carolina on a case involving an Alberta man who admitted to killing his wife.

Johnston spent years reporting on the progress of dangerous offender Leo Teskey through the justice system. Following her reports, the provincial government made it illegal for dangerous and long-time offenders to change their names.

In 2016, she won a national Radio Television Digital News Association award for her coverage of the trial of a 13-year-old Alberta boy who was acquitted of the murder of his abusive father.

She was held accountable for holding the justice system accountable for her coverage of Alberta police departments withholding the names of murder victims. She told the story of a sexual assault victim who was imprisoned while testifying against her attacker.

She was the ultimate court reporter.—Brian Beresh

Albertans have lost a valuable and trusted voice, said Chief Justice Mary Moreau of the Court of King’s Bench.

“Janice Johnston was very knowledgeable, attentive and thorough, and always brought these qualities to her reporting,” Moreau said in a statement.

“Her seniority among Alberta reporters and the respect she earned from her peers and members of the judiciary also made her an effective advocate for media access to the courts.”

Johnston was generous with her extensive knowledge and worked as a mentor to countless young journalists.

A former colleague, TBEN correspondent Briar Stewart, said she will always remember Johnston’s confidence in the courtroom, when she would stand up to argue before judges that media outlets should have access to court documents or other legal documents.

“She was a force and always so generous to share her expertise. I know I learned a lot from her,” said Stewart.

Meghan Grant, who reports on courts and crime for TBEN Calgary, met Johnston while covering a parole hearing in 2016. They became friends and made it a point to catch up whenever they were in each other’s cities.

“Recently, my son and I had lunch with Janice on a sunny terrace in Edmonton in August, including glasses of rosé,” Grant said Friday.

“She insisted on paying. She also gave me a pillow she made. Janice was incredibly generous, thoughtful and crafty in every sense of the word.”

Johnston studied radio and television arts at what was then Ryerson University (now Toronto Metropolitan University) and landed her first job in Wingham, Ont.

She moved to Edmonton in the 1980s, where she worked first as a reporter and later as a news director at radio station CISN. She went to work at CFRN-TV as a reporter. She started at TBEN in the early 2000s.

“A Best Friend in Your Partner”

Johnston and her husband Scott, a fellow journalist, had been together for 36 years and celebrated their 20th anniversary by renewing their vows on a Caribbean beach. Scott Johnston is now working with the Alberta government.

Johnston recently wrote on social media that she was lucky that she and her partner still looked at each other like when they first fell in love.

Milles said her parents’ relationship was an inspiration to her.

“I think it’s so cool that they both got to do the same job together and we sat down at the dinner table and heard about their days,” she said. “They taught me such a great example of how to have a best friend in your partner.”

Despite the serious nature of Johnston’s work, she loved to have fun. She had many passions and hobbies that kept her busy and spent a lot of quality time with her family.

“She covered courts and crime during the day, then we watched The Bachelor and drink wine and go for lunch and catch up every weekend. And she was so loving and caring in that way,” Milles said.

Her mother was an Earth, Wind and Fire superfan who also loved Bruno Mars. When there was music on at a party, Johnston was dancing.

She was also the TBEN editorial fashionista, known for her impressive collection of designer shoes.

Johnston was as adept with a needle and thread as she was with her pen.

When she wasn’t doing crime reporting for Edmonton’s courts, she used crafting — and sometimes canning — to help her relax.

Becoming a Gigi was a point of pride for Johnston and hugs from granddaughter Cali were the highlight of every family gathering.

In 2020, hours before her 60th birthday, Johnston wrote on Facebook what she had learned from her life.

She spoke of her affection for her late mother, the love she shared with her husband, and the pride she had in her family and her career.

“I’m thankful to have a career that I love [and] the ability to tell people’s stories.”