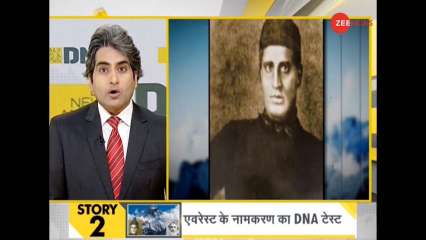 Do you know why and how the highest peak in the world got its name from Mount Everest? History has taught us that in 1856 the Royal Geographical Society named the tallest mountain peak in the world “Mount Everest”. It was named in honor of Sir George Everest, who was the head of the survey and mapping organization Survey of India from 1830 to 1843. Sir George Everest died on December 2, 1866.

Radhanath Sikdar was a great mathematician from India and it was he who first measured the height of Mount Everest, the highest peak in the world. But the British stole his credit and gave it to Sir George Everest, who didn’t even know there could be a mountain peak in the world higher than Kanchenjunga.

In 1824 he was admitted to The Bharat Express News school in Calcutta, known today as Presidency University. His favorite subject being mathematics, he continued his studies in this subject.

The computer was not invented at that time. People did all the calculations themselves, and these people in Survey of India were called “computers”, because the basic job of a computer is to calculate.

In the 1830s, the Survey of India team approached the Himalayan mountain range. At that time, the top of Kanchanjanga mountain was considered the highest peak in the world.

But later a mountain peak named Peak 15 was identified and the work of this measurement was turned over to Radhanath Sikdar. Mount Everest was previously called Peak 15.

At that time, foreigners were not allowed to enter the Nepal border, so Radhanath Sikdar could not go there. But from afar, he calculated the height of peak 15 using a special tool and the TRIGNOMETRY formulas used in mathematics, and this height came to 8,839 meters.

In 1852 he gave this information to Andrew Scott Waugh, who was the director of the Survey of India after Sir George Everest. But you’ll be surprised to know that Andrew Scott Waugh hasn’t told anyone about this Radhanath Sikdar success for four years.

Andrew Scott Waugh considered Sir George Everest as his mentor and that is why he sent a proposal to rename the mountain top “ Peak 15 ” as Mount Everest and the proposal was also accepted.

And in this way, the merit of measuring the official height of Mount Everest was taken away from Radhanath Sikdar. And the highest peak in the world was named after an Englishman who hadn’t even seen it.