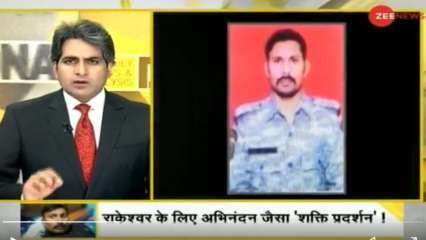 CRPF four-year-old daughter jawan Rakeshwar Singh Manhas made a poignant appeal to the Naxals to release her father who was allegedly abducted by them. “Please release my father,” pleaded Shragvi, five, the daughter of a CoBRA commando held hostage by Naxals after an ambush in Chhattisgarh.

We want the whole country to join the campaign to protect the lives of all the young men who don’t hesitate to give up their lives to protect us. We demand the release of Rakeshwar Singh from the clutches of the Naxalites.

Even after 80 hours, the Cobra Battalion of the CRPF, Jawan Rakeshwar Singh Manhas, would be held captive by the Naxals.

On April 2, 10 security forces teams left to catch Naxalite Madvi Hidma in the forests of Bijapur. Rakeshwar Singh was also part of the operation. He had spoken to his family before going to the operation. He had told his wife he would call her the next day. But 80 hours have passed, they haven’t received any calls so far.

Rakeshwar Singh is 35 years old and his whole family lives in Jammu district. Rakeshwar Singh was posted to Bijapur two years ago. The family consists of his mother, brother, wife and four-year-old daughter and all await his return. Today, when our team visited his home in Jammu, the mood was grim. The family had tears in their eyes and all the family members gathered in a room in the hope that Rakeshwar Singh could receive a call at any time.

So this is not only their campaign but also ours and we all want Rakeshwar Singh to come home safe.

An alleged Maoist statement on Tuesday claimed that they kidnapped a jawan in a recent shootout with security forces in the Bijapur district of Chhattisgarh and called for the appointment of some mediators for his release. A two-page statement reportedly issued by the CPI (Maoist) CPI’s Special Zonal Dandakarnya Committee (DSZC) said the kidnapped jawan “would be safe in his custody” and would be handed over to the police after mediation.

The statement is under review, said a senior security officer and a CRPF commander. Signed by DSZC spokesman Vikalp, the statement said the government should declare the names of certain “mediators for the release of the captured jawan”.

The statement claimed that the ultras had looted 14 weapons, more than 2,000 bullets and a few other communications gadgets from the soldiers killed. The statement added that four Naxals were killed in the ambush and added that they could not choose a body.

ALSO READ  Sikh Jawan tied a turban to a soldier's bleeding leg, was shot, both survive

You may remember that when the Balakot airstrike took place in 2019, Wing Commander Abhinandan Vardhaman was rescued from Pakistan. At the time, India made it clear that India would not tolerate it if Pakistan did not spare Abhinandan.

Today, once again, it is necessary to save another brave young man from our country. However, this time we do not have Pakistan ahead of us. Rather, they are our people – the citizens of this country.

Today, many people also wonder why there is such a delay in the case of Rakeshwar Singh when the government rescued Wing Commander Abhinandan Varthaman from Pakistan in just 60 hours.

This fight is against ourselves and in such battles the hands of the security forces are tied with human rights chains because today if the government frees Rakeshwar Singh with a major strike against these Naxalites , then some people in this country will stand up. against the government and the security forces. International institutions will also endanger human rights in India. And this is the real misfortune of our country.

Imagine today that a jawan has been taken captive by the Naxalites in the past 80 hours. But have you heard anywhere that these institutions have expressed concerns about this? Have you heard of executives who often open their stores and sit down after such attacks? Who talk about intelligence failure. The bitter truth is that everything in our country is on the agenda.

Vijay Mandvi was also present when the Naxalites attacked Bijapur in Chhattisgarh on April 3. He participated in the operation on behalf of the Chhattisgarh Police District Reserve Guard. And he suffered numerous injuries in the attack. The important thing is that Vijay Mandvi himself was a Naxalite earlier. But when he visited in 2016, he got a job with the District Reserve Guard team.

Today when our team spoke to him, he told us that Naxalite Madvi Hidma himself was present during the entire attack. And was leading this attack. Yesterday we told you that it was very important to catch Madvi Hidma before the terrorist Hafiz Saeed because these Naxalites are the greatest threat to the security of the country.