Starting with the wireless line, TCL announced the ELIT200NC in-ear headphones with 12.2mm high-resolution audio drivers. These are priced at Rs. 2299 in India. They support SNC functionality and support Bluetooth v4.2 connectivity. The company claims that the in-ear accessory can last for 10 hours of playback without ANC and eight hours with ANC on. It is said that 15 minutes of charging provides two hours of playtime on the ELIT200NC. The headphones incorporate echo cancellation technology to ensure clear calls. They have a flexible neckband design and are also available with a wired option. The TCL ELIT200NC are available in Cement Gray and Midnight Blue color options.

There is also the TCL ACTV100BT which is priced in India is Rs. 1799 and they also support Bluetooth v5 connectivity. The company claims to offer uninterrupted playback for up to 12 hours. Fast charging support is also built in with a 15-minute charge claiming to provide two hours of playback. They have a flexible ear hook design and an adjustable cable for better grip. The TCL ACTV100BT are IPX4 sweat and splash resistant and feature a nano-coating for added protection. These headphones are available in Monza Black and Crimson White colors.

Finally, in the wireless segment, TCL also announced the SOCL200BT and these are priced at Rs. 1,299 in India. These are neckband-style wireless headphones that support Bluetooth v5 and are said to offer up to 17 hours of battery life. The company claims that these wireless headphones can be fully charged in two hours, and a quick 15-minute charge gives you three hours of gaming.

TCL also launched two in-ear headphones in India. The most premium model – TCL ELIT400NC – is priced at Rs. 6,999 in India. They were made available in Cement Gray and Midnight Blue color options. The wireless headphones support ANC and Hi-Res Audio. The company claims that the headphones can last for 22 hours of playback with ANC off and 16 hours of playback with ANC on. They support fast charging with 15 minutes of playtime claiming to last around four hours of playtime. The TCL ELIT400NC comes with a memory foam pad and is lightweight for better overhead comfort. It also comes with music and call controls and echo cancellation technology.

Finally, there are the TCL MTRO200 on-ear wired headphones which are reasonably priced at Rs. 1,099. They incorporate 32mm drivers to reproduce punchy bass. They come with an in-line microphone and remote control for music and call control. The headphones are available in the colors Ash White, Burgundy Crush, Shadow Black and Slate Blue.

In the wired in-ear headphone segment, TCL introduced the TCL ACTV100 priced at Rs. 699. It was launched in two color options – Manza Black and Crimson White. The earphones come with three different sized ear tips and have an oval shaped acoustic tube for better grip around the ears. The TCL ACTV100 has a flexible ear hook design and is IPX $ 4 sweat and splash resistant. 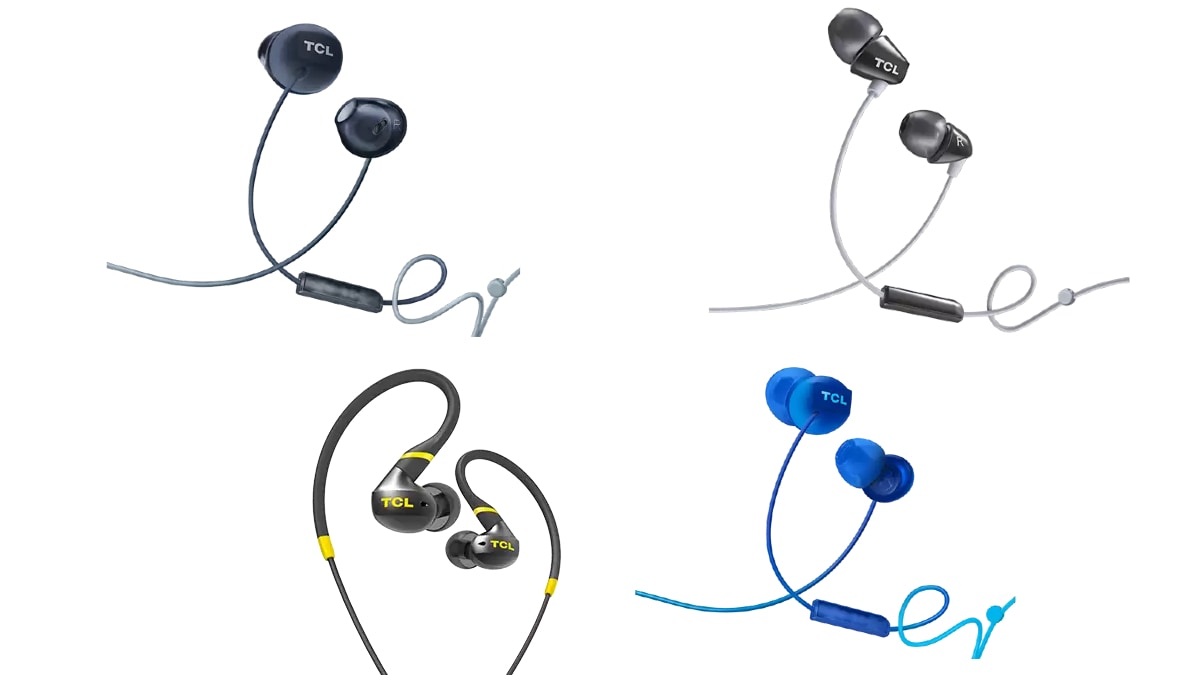 The TCL SOCL300 are sold in India at Rs. 599 and these in-ear headphones are equipped with 8.6mm audio drivers. It offers enhanced bass and medical silicone ear tips to prevent skin irritation. There are also the TCL SOCL200 which are priced at Rs. 499 and are integrated with 12.2mm audio drivers. Finally, there are the entry level TCL SOCL100 priced at Rs. 399 in India. These launched in several color options – Ocean Blue, Phantom Black, Sunrise Purple, and Sunset Orange.