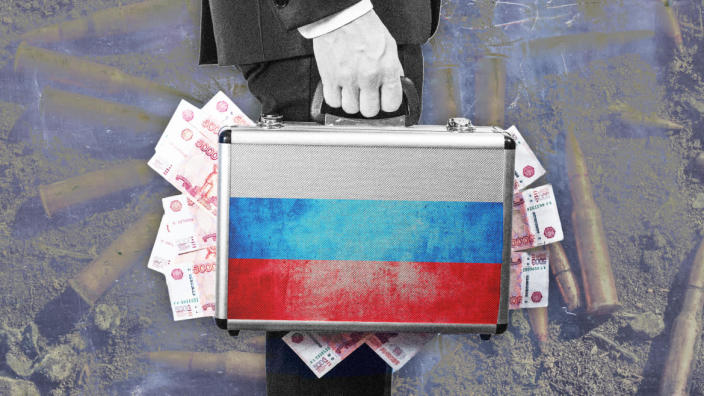 Even the most staunch pro-Kremlin propagandists have not been able to hide their concerns about the apparent failings of the Russian economy and its military-industrial complex. On Wednesday’s state television show 60 minuteseven the studio seemed in disarray, with a large pool of water clearly visible at one of the stages.

Senior military analyst Mikhail Khodaryonok poured even more water on Putin’s statement when he noted during the show, “Mobilization is the face of the nation.” That face seems to be missing some teeth, with glaring issues related to the lack of military equipment and technologies that even the most rabid propagandists complain about. Khodaryonok pointed out: “An issue no less important than others is how well these people will be armed and equipped… They should have modern uniforms, modern equipment, rations, medical equipment, items related to support and logistics. , modern weapons… It’s just inappropriate.”

Those lucky enough not to be mobilized should contribute in other ways, military expert Igor Korotchenko stated during his performance on the show.

“It is extremely important that our new military divisions that are being formed today are given the necessary equipment and weapons,” he stressed. “As we are talking about the future of our nation, there must be a consolidation of all available resources. We need to create a support fund for the special military operation. Our socially responsible prominent oligarchy must share their profits so that our fighters on the front lines can be properly armed and equipped.”

Russia implodes after Putin calls for 300,000 to die for him

Korotchenko continued: “Everyone should play their part. We can’t bear that some will enjoy Rublyovka [a prestigious residential area in the western suburbs of Moscow]while others defend the motherland. Those who are fattened up economically need to share their resources so that we can provide our troops with whatever is needed.”

However, it seems that the Russian elite – including many pro-Kremlin propagandists – would rather cheer from the sidelines than join Russia’s brutal and bloody imperial enterprise. Host of 60 minutes On the broadcast, Evgeny Popov considered whether he was subject to mobilization, with an expression devoid of any sign that he felt particularly happy.

Dmitry Nizovtsev, host of Popular Politics, a YouTube channel run by supporters of opposition leader Alexei Navalny, joked about the sons of Russian President Dmitry Peskov’s press secretary and Russian Prime Minister Mikhail Mishustin. Neither Nikolai Peskov nor Alexey Mishustin expressed a desire to fight in the front line, and both rushed to end the conversation. Coincidentally, the rich and well-connected in Russia do not have to risk their lives and limbs to serve the motherland.

Still, that doesn’t stop many of these talking heads from expressing their opinions fiercely verbal support for the Kremlin’s new decisions to millions of people across the country.

On another broadcast of 60 minutes, Andrey Kartapolov, head of the Duma defense committee, tried with a sour face to convince the panelists of the happiness that they “live in such wonderful times”, with Russia “becoming the axis of a new world order”. Dmitry Abzalov, director of the Center for Strategic Communications, apparently had no luck and wondered if the Russian economy is prepared for what is to come.

In the hours leading up to Putin’s announcement, another member of the State Duma, Andrey Gurulyov, was full of excitement. “It is clear to me that today’s decision is the beginning of the end of Ukraine. That’s it, that nation no longer exists,” he said on a broadcast of The evening with Vladimir Solovyov. “Ukraine’s history is coming to an end and maybe that’s a good thing.”

ALSO READ  Teacher shortages are real, but not for the reason you've heard

In the weeks leading up to the announcement, the Kremlin state television spokesperson appears to have laid the groundwork for the mobilization. State television program 60 minuteswhich spent many months mocking Ukrainian troops and mocking Western weapons, suddenly changed course, with host Olga Skabeeva unexpectedly admitting that the Ukrainian army was a “powerful” fighting force and that NATO’s weapons were “highly effective”.

Appearing in Wednesday’s broadcast of The evening with Vladimir SolovyovRT head Margarita Simonyan admitted that Putin’s mobilization is a forced measure, prompted by the military defeats of the Russian armed forces in Ukraine: “Am I happy that we have declared partial mobilization? No, I am not happy… It is clear that a partial mobilization has been declared because we cannot achieve our goals without it.”