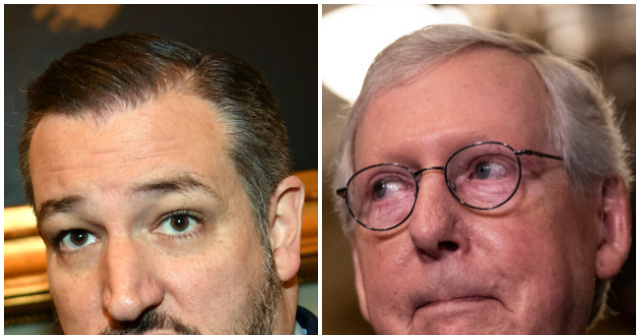 Senator Ted Cruz (R-TX) announced Tuesday that he intends to file a motion to delay Senator Mitch McConnell’s (R-KY) Senate leadership vote on Wednesday until after the second round of the senate in Georgia has ended.

“Tomorrow I will be filing a motion to postpone the Republican Senate leadership election until AFTER the Georgia election so we know who will be at our conference,” Cruz said on Twitter.

“The Republican leadership needs a plan to combat the Biden admin’s disastrous policies,” Cruz said added. “After a disappointing election, it’s ridiculous that Republicans immediately label the same leadership without having this discussion.”

Cruz’s strategy could succeed. McConnell declared on Tuesday that he has the votes to be re-elected as leader of the GOP Senate, but left the timing of the vote open.

“I have the votes. I will be elected,” McConnell said at a press conference on Tuesday. “The only question is whether we do it sooner or later.”

A group of Republicans has tried to prevent McConnell from holding the scheduled vote on Wednesday. A postponement could likely help McConnell’s opposition, giving the conference more time to be swayed by Senator Rick Scott, who announced Tuesday that he will oppose McConnell’s reelection.

“If you just want to stick with the status quo, don’t vote for me,” Scott’s announcement read. “Republican voters expect and deserve to know our plan to promote and advance conservative values… That’s why I’m running for Republican leadership.”

“Like all of you, I am deeply disappointed by the results of the recent election,” Scott added. “Despite what the quarterbacks on TV will tell you, no one in the entire country is responsible for our side’s performance.”

In order for Scott to replace McConnell, he must win a simple majority of GOP senators. So far, Sen. Ron Johnson (R-WI) and Sen. Mike Braun (R-IN) have supported Scott. Voting takes place by secret ballot and behind closed doors.