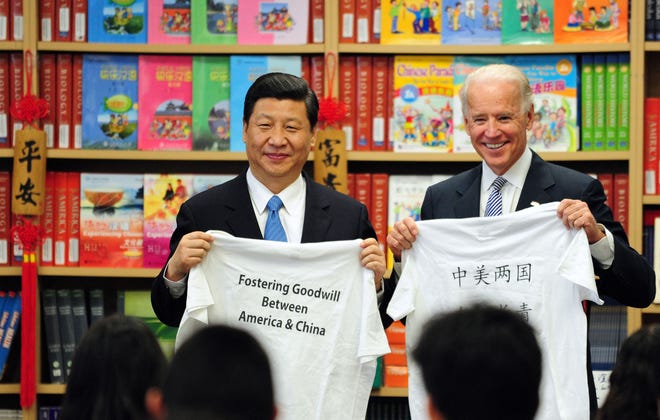 WASHINGTON — President Joe Biden will go from battling Republicans at home to sparring with foreign rivals as he embarks on a week-long trip to Asia.

Biden is bracing for a face-to-face meeting with new Chinese President Xi Jinping at the annual Group of 20 summit to be held this year in Bali, Indonesia.

He is also expected to hold uneasy talks with a range of countries that have remained neutral during the Russian invasion of Ukraine. The multi-day affair will mark the first time the world’s top economies, collectively known as the G-20, have come together since Russian President Vladimir Putin launched his blistering military strike.

Biden scored an early diplomatic victory when Russia announced plans for Putin to skip the summit. Western leaders and Japan have declared Putin persona non grata — and Biden said he had little motivation to speak to Putin at the conference.

The talks will be “less awkward” than when Putin was expected to attend, said Kelly Ann Shaw, a former G-20 chief negotiator and deputy director of the National Economic Council in the Trump administration. But “there will still be some inherent tension.”

Putin’s presence threatened to derail the gathering, which is typically marked by working lunches and group dinners, enthusiastic handshaking, backlash, and family photos. Participating countries also issue joint statements at the summit’s conclusion that are often light on details, but promise cooperation in areas of shared concern.

“You’re going to have some more candid conversations between leaders where they talk about what to do about the energy crisis, what to do about food shortages, fertilizer shortages, how to handle the war in Ukraine,” Shaw said. “And you don’t have the tension from Putin to be physically in the room and argue about it.”

Xi’s Rise:Xi Jinping to remain ‘chairman of everything’ in China after being given a third term

Tension in US relations with Saudi Arabia, a major oil producer that partnered with OPEC countries last month to drastically cut production, and animosity between some countries and China are also complicating factors.

“Usually when these leaders see each other, no matter what geopolitical tensions are going on, there’s kind of a sense of shared leadership, shared responsibility in that room,” said Josh Lipsky, a former White House aide to Barack Obama and senior director of the United Nations. GeoEconomics Center of the Atlantic Council.

“All the interactions — I don’t think there will be fist bumps — will be sort of a basic diplomatic requirement and nothing more.”

Biden came under heavy criticism for fist-fighting Saudi Crown Prince Mohammed bin Salman – the de facto leader of the kingdom – during a July trip to Jeddah, where the US president failed to see a substantial increase in the oil cartel’s production. to accomplish.

Before taking office, he had vowed to make the crown prince a “pariah” for ordering the death of American journalist Jamal Khashoggi in October 2018.

Since the production cut, Biden has said the US is reviewing its relationship with Saudi Arabia and promising “consequences” amid backlash over cuts by lawmakers on Capitol Hill.

sen. Chris Murphy, chairman of the US Senate Foreign Relations Committee for the Near East, South Asia, Central Asia and Counterterrorism, has pushed for a major reassessment of relations and a smaller US military footprint in Saudi Arabia, but said in an interview that he has no objection to Biden having a meeting with Bin Salman at the summit.

“I think the president should meet with our friends and adversaries, with a few exceptions,” said Murphy, D-Conn. “I want the president to talk to whoever he thinks would be helpful to talk to.”

The only head of state the US has had brief relations with that Biden is fishing to meet is Xi.

Biden has been pushing for a face-to-face meeting for months about Russia’s war against Ukraine and China’s deteriorating relationship with Taiwan. He also plans to talk to Xi about global efforts to combat climate.

“What I want to do with him, as we talk, is map out … what all our red lines are,” Biden said at a news conference on Wednesday. “Understand what he thinks is in China’s critical national interests, what I know is in the United States’ critical interests, and determine whether they conflict with each other. And if they do, how to fix this and how to work it out.”

In the meantime, the government has stepped up its efforts to prevent China from expanding its nascent computer chip manufacturing industry. The US considers competition with China to be one of the top national security challenges.

Since securing a norm-defying third term at the Chinese Communist Party Congress last month, Xi has tightened his grip on power and intensified his own diplomatic efforts.

He has hosted the leaders of Germany, Vietnam, Tanzania and Pakistan in recent weeks and plans to attend the Asia-Pacific Economic Cooperation Summit in Thailand when the G-20 ends. Xi also reportedly plans to visit Saudi Arabia before the end of the year.

Biden is unlikely to wring firm commitments from Xi, but sitting down with him is constructive, said Gerard DiPippo, a senior fellow in the Economics Program at the Center for Strategic and International Studies.

“Nobody really wants to talk about engagement anymore, because that’s a dirty word. But I think there’s a recognition among Asia policymakers that we need to talk,” DiPippo said.

Latest updates for Ukraine:100,000 Russians killed, wounded in Ukraine; 90% of Ukrainians see a bright future for the country

Midterm elections:How did candidates who doubted, denied the outcome of 2020 fare in Tuesday’s election?

Even among historic allies, the summit may not be all rosy.

Biden must reassure countries that Ukraine’s aid is not on the chopping block, despite domestic inflation concerns and pressure from some Republicans to cut spending.

“That is an important message to get across. But then he has to come home and carry on, possibly with a divided caucus, which isn’t going to be an easy thing to do,” Lipsky said.

The president is also likely to face questions in light of his party’s medium-term performance on the $11 billion in international climate finance he promised the US would spend annually by 2024. The money that would help lower-income countries fight climate change would be appropriated by Congress.

Biden plans to visit the Egyptian resort town of Sharm el-Sheikh just long enough to meet Middle East President Abdel Fattah el-Sisi and give a speech on climate change. He will immediately leave for a meeting of Southeast Asian countries in Cambodia, where he will try to convince the participating countries to reject economic partnerships with China and accept investments from private companies based in the US.

While his focus in Bali will be on Xi, Biden also plans to meet Indonesian President Joko Widodo. European countries and the US are in the final stages of developing a plan to further choke Putin’s resources by imposing a price cap on Russian gas and oil.

The Biden government has fought hard for the pact but has run into difficulties with countries like India and Indonesia considering joining.

“I definitely think there will be a full press effort from the court to try and get them to take action,” Shaw said, “to resolve the conflict as quickly as possible.”