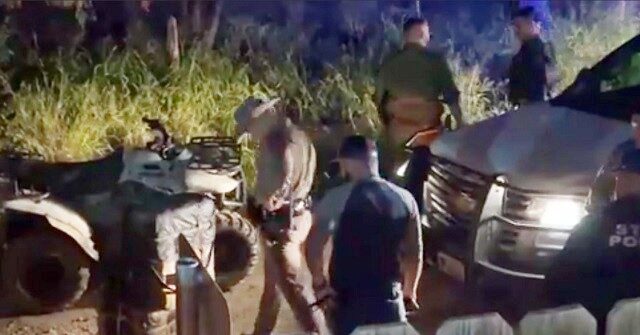 Texas DPS troopers assigned to Governor Greg Abbott’s Operation Lone Star received information from a camera operator from the Rio Grande Valley Sector Border Patrol who observed an All-Terrain-Vehicle (ATV) loaded with what appeared to be migrants and bundles of marijuana sent from the border moved north near Escobares. DPS spokesman Lt. Christopher Olivarez tweeted photos of the vehicle after troopers made the arrest.

3 drug smugglers from MX tried to smuggle 4 bundles of narcotics through ATV into Starr Co. The ATV, driving without lights, collided with a parked @TxDPS patrol unit. 1 smuggler fled on foot and 2 were arrested. #OperationLoneStar pic.twitter.com/eOyR7zsCXM

The driver of the ATV, a Mexican national, suffered an arm injury after colliding with a DPS vehicle. The troopers placed him under arrest after finding about 182 pounds of marijuana in bundles.

Troopers arrested another migrant, also a Mexican illegally present in the United States. The third suspect fled back across the border to Mexico.

Kudos to Rio Grande City agents who encountered groups of more than 100 migrants in La Grulla, TX, on consecutive days, totaling 283 migrants. RGC agents also arrested a migrant who was transporting marijuana on an ATV with the help of @TxDPSSouth! Well done RGC! https://t.co/QVCDyMMFla pic.twitter.com/dej6htu5rf

Bob Price serves as associate editor and senior news officer for the Breitbart Texas-Border team. He is an original member of the Breitbart Texas team. Price is a regular panelist on TBEN 26 Houston’s What is your point? Sunday morning talk show. Follow him on Twitter @BobPriceBBTX and Sightbook.