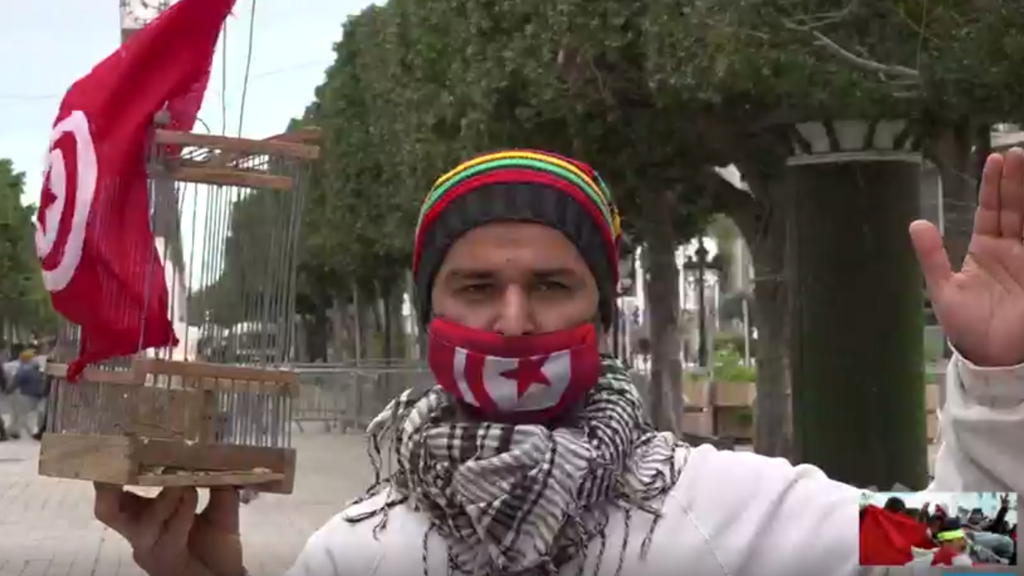 This week marks the tenth anniversary of the flight of fallen strongman Zine al-Abidine Ben Ali, the first to fall as the Arab Spring of 2011 took hold in North Africa and the Middle East. Although democratic progress has been made, many Tunisians believe the revolution’s promise of a better life has never really materialized, especially in the country’s poorer south and interior. TBEN presents the fourth and final part of a series of reports on Tunisia, a decade after the dawn of the Arab Spring.

Wadii Jelassi formed a lasting image of the Tunisian uprising when – as a 21-year-old unemployed man protesting against the Ben Ali regime – he was photographed holding a small cage aloft.

“It was not I who held the cage on January 14,” he said, “it was the Tunisian people, the young people. I tied the flag to it, the cage opened, and the dove flew away as if freeing itself. For 23 years we have been imprisoned, oppressed, marginalized and poor. “

With the old regime gone, Wadii turned to politics but quickly lost his illusions. Now he has returned to activism.

“Ten years after the revolution, nothing has happened,” he said. “In fact, it’s the opposite. We are poorer and even more marginalized. There is more misfortune, the country is heading towards the wall. The powerful always steal from us.

Myriam Bribri also participated in the uprising of 2011, and has a more positive image of the effect of the revolution on contemporary Tunisia. “The revolution wasn’t just a moment, it’s an ongoing process,” she says.

“The revolution has removed the fear factor,” Bribi continued. We were no longer afraid … I feel like there is so much I can do.

Report by Karim Yahiaoui, Mohamed Farhat and Chris Moore from TBEN.To watch, click on the video player above.

Beny Steinmetz, a mining magnate, found guilty in a corruption trial in Switzerland

On the ‘roof of Africa’, Ethiopian troops drive out former fugitive rulers

The Bharat Express News - January 23, 2021 0
The Cross River government demolished the “Save Side Hotel” in Calabar for harboring suspected kidnappers terrorizing the state. Mr. Henry Okokon, security adviser, South, to...

Court to adjourn hearing in complaint against Tandav web series until...