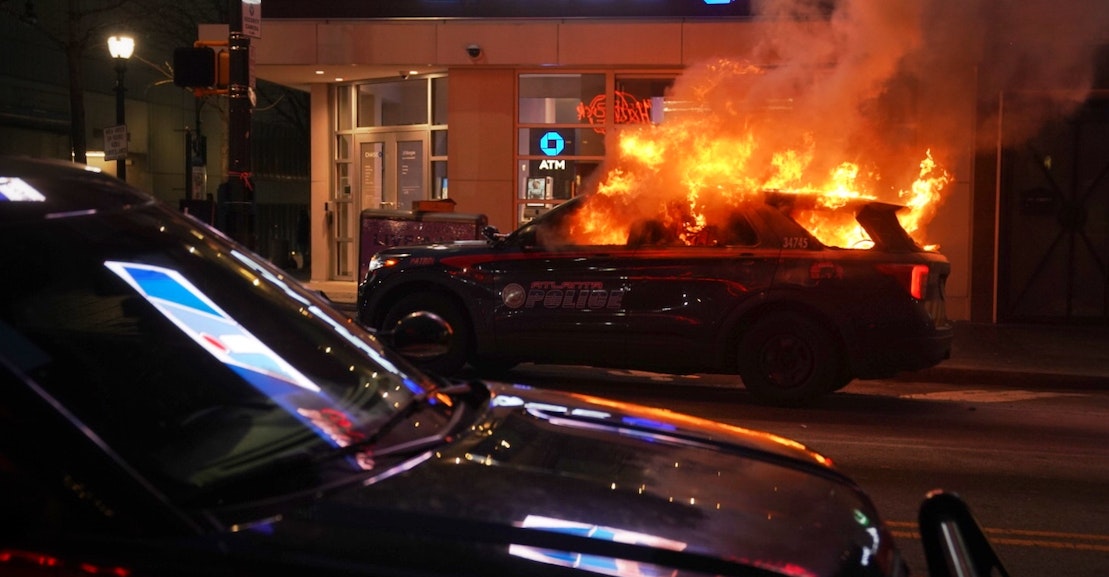 Last week, a Georgia State Patrol officer shot and killed 26-year-old Manuel Esteban Paez Terán. City.” Terán — who was non-binary and went by the name of Tortuguita — is the first known forest defender, as these environmental activists are often called, killed by U.S. police. Authorities have argued that Terán failed to comply during a “clearance operation” and fired first, injuring an officer, but have so far not provided the public with evidence to support this, as there is no CCTV footage of the incident.

The snowballing militarization of the US police has coincided with an increased criminalization of protests. Both efforts share the generous support of corporate financiers. If both phenomena continue rapidly, it is easy to imagine that more protesters, like Terán, could soon be injured or killed.

Police killings of environmental defenders are much more common in other countries with large extractive industries, including Brazil, Honduras and Nigeria; Global Witness research published last year found that an environmental activist has been killed every two days for the past decade. While Terán’s shooting is the first known police killing of a forest defender in the US, a drum roll of recent accounts has increasingly portrayed those protesting major development projects as public enemy number one. If the security state has a mantra after 9/11, it’s that it’s easier to get away with killing someone if you can call them a terrorist. And the South Woods Forest case, tragically, seems to illustrate that principle: Seven of the forest defenders swept up in last week’s raid have now been charged with domestic terrorism, in addition to the six Stop Cop City activists charged with domestic terrorism and a host of other misdemeanor and misdemeanor charges last month.

In the years since demonstrations against fossil fuel infrastructure such as Keystone XL and Dakota Access Pipelines have gained prominence, thirty-nine states have passed bills to further criminalize protests near oil and gas pipelines and other “critical infrastructure.” Part of this wave was Bill 1 of the Georgian Senate. Passed in 2017, the measure lowers the threshold to hit protesters with charges of domestic terrorism, including actions by an individual against critical infrastructure defined as “public or private systems, functions or assets, whether physical.” or virtual, vital to the security, governance, public health and safety, economy, or morale of this state or the United States.” Actions intended to promote “any ideology or belief” are also vulnerable to such accusations. Like other such bills, SB 1 resembles the model policies being promoted by the American Legislative Exchange Council (ALEC), the technically nonpartisan group that has blanketed state legislatures with carbon copies of right-wing priorities such as Right to Work and Stand Your Ground laws. As Only Brown reported for The Intercept, based on research from Greenpeace, fossil fuel companies have been instrumental in pushing those bills through, both as ALEC members and through state-level lobbying efforts.

ALSO READ  Brad Pitt remembers his first love scene, his breakout role and the actor who left him in a daze

The 85-acre project that South Woods Forest activists sought to prevent is being supported by the Atlanta Police Foundation, one of a number of nonprofits dedicated to funneling corporate money to police departments. It has pledged $60 million to the facility, which will include a “mock city for real-world training” with a mock nightclub and convenience store — all on land leased by the City of Atlanta to the APF for $10 a year . Residents would be charged with paying the remaining $30 million expected to be costs of the project. As Timothy Pratt reported for Atlanta Magazine, public input into the APF’s plans was sparse. Although a majority of comments submitted on the facility opposed it, the City Council voted 10 to 4 to proceed.

While there are now police foundations in almost every major city, Atlanta’s stands out. Atlanta is the 38th largest city in the country. The police foundation is the largest after New York. According to a 2021 report by Color of Change and the watchdog group LittleSis, revenues for the Atlanta Police Foundation increased 45 percent from 2018 to 2019. Police accounted for one-third of the city’s $700 million budget in 2022; in 2019, the Atlanta Police Foundation donated $11 million to the department. It has purchased 11,000 surveillance cameras, as well as equipment from the SWAT team. Less than a week after police shot and killed Rayshard Brooks in the summer of 2020 — when the police chief resigned and two of the officers involved were charged with felony charges — the Atlanta Police Foundation gave every cop in the city a $500 bonus.

The funders of police foundations across the country, Color of Change and LittleSis say, include the nation’s largest corporations and companies that have ever been members of ALEC in the private sector. Those donors also include the fossil fuel companies that pushed through protest crime bills, including Marathon Petroleum. Atlanta-based logistics giant UPS has people in leadership positions in both ALEC and the APF. For example, APF’s Board of Directors includes UPS Chief Legal and Compliance Officer Norman Brothers Jr., as well as former UPS Senior Vice President of US Operations Calvin Darden. Mike Kiely, UPS President of Government Affairs, serves on ALEC’s Private Enterprise Advisory Council.

The same interests that want to criminalize protests against fossil fuel infrastructure are also trying to build an ever stronger police force capable of enforcing those laws – including against developments like Cop City. The broader logic here isn’t hard to interpret: if protecting corporate profits and priorities is the goal, nothing should get in the way – regardless of the cost in human lives.

The post The Atlanta police shooting is a warning sign for the safety of environmentalists appeared first on New Republic.