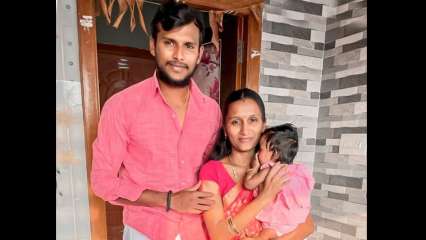 From his performance for Sunrisers Hyderabad (SRH) in the Indian Premier League (IPL) to his debut for India in the Down Under series against Australia, T Natarajan has surely garnered all the attention.

T Natarajan is hopeful his strong debut in international cricket will continue after being named to the T20I squad for the five-game series against England, from March 12.

So before the series, Stimulator makes sure to spend some quality time with his wife and newborn daughter Hanvika. On Monday, he took to Instagram to post a photo of himself with his daughter for the first time. His wife was also accompanying him in the photo.

Calling her daughter ‘laddu’, Natarajan wrote: “Our little angel Hanvika. You are the greatest gift of our life. You are the reason our life is so much happier. Thank you Laddu for choosing us as parents. love you always. and forever “

The pacemaker had missed the birth of his daughter in November while playing IPL in the UAE. Immediately after the IPL, he flew to Australia and was only able to see his child last month after returning home.