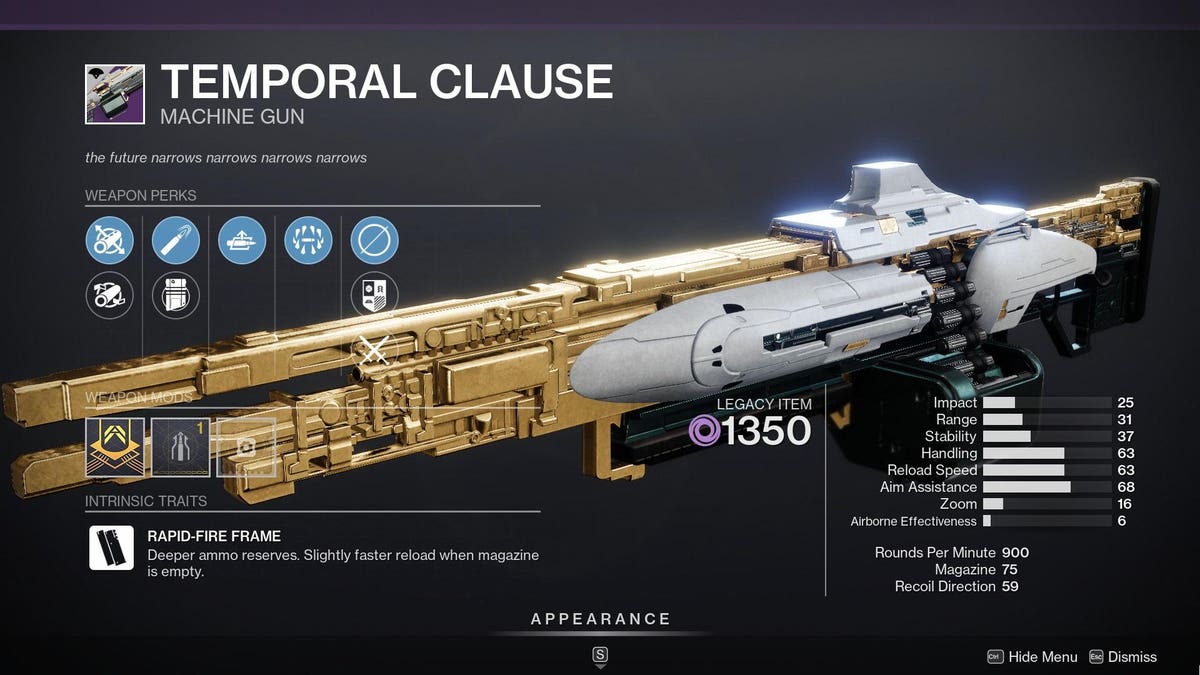 This weekend, Destiny 2 Community Manager DMG posed a question to players asking what their favorite Legendary weapons in the game are.

It doesn’t matter how good the weapon is, just if you like the way it looks. I have absolutely no idea if this is just DMG posting something random and fun, or if this is actually data Bungie is collecting to see what has been brought up most often and they will use it to make future design decisions somehow to inform.

Of course, I love anything aesthetic in Destiny 2, so I had to make my own list here. I was going to do a top 10 but then I just kept going and going and I don’t even know how many I finished before I had to quit. But here are my picks, in no particular order, with no special shaders. Let me know what your own would be on Twitter.

breakthrough – My all-time favorite Destiny 2 weapon, both in terms of how to use it, but I also absolutely love the Saint-14-themed dawn season aesthetic.

Pluperfect – I forgot about this until Rick Kackis suggested it in the DMG thread, and it’s a great choice. One of two very unique weapons in the Undying Season Pass, and I’ve got the other one further down the list here.

Chroma Rush – Another top performer and something with a totally unique Season of the Splicer style.

transfiguration – Lots of great Last Wish weapons, but if I had to pick just one, I love how Transfiguration uses the Ahamkara bot theme.

Friction Fire – These Season of the Hunt weapons are really nobody’s best choice, but I really like the unique look of the weapons during that season.

midnight coup – One of the most beloved weapons in Destiny 2 history, and with an iconic aesthetic befitting its legendary status.

Prophet of doom – Shotguns aren’t usually known for being terribly stylish, but Prophet of Doom from Garden is a clear exception.

Iota Draconis – Season of the Lost weapons aren’t exactly top picks, but I really liked the musical name and visual theme of this, especially this fusion.

Styker’s sure hand – Out of Season of the Forge comes one of Destiny 2’s best swords, and I hope it returns here soon enough with updated perks.

Goldtusk – This fighter-only sword is just so clean, plus there’s the ninja run you get while wielding it.

storm chaser – You won’t notice a lot of weapons from Year 4 here, but all the duality weapons that are kind of demented Calus Leviathan weapons are top notch.

Temporary clause – This was the matching MG to Undying’s Pluperfect, and it’s sad that it was both sunset and a bit horrific at the time. It’s beautiful.

Rose – Sometimes simplicity is best, and while this was a quest step weapon, it was a favorite for a while, both in performance and looks.

Seventh Seraph Officer Revolver – A great example of Destiny 2 doing great things with a more modern aesthetic, and one of the nicest hand cannons in my book.

Servant Leader – A more grounded, shotgun-style look for one of my favorite scouts, who also has the honor of being one of the best-feeling weapons in the game, if you ask me.

IKELOS SR – I love how unique all IKELOS weapons look and feel, and it was a toss-up between this and the gun to appear here.

The ruins of Lubrae – I haven’t seen many examples of “this looks so good it should have been an exotic obviously”, which I have to believe was the original plan for Rhulk’s glaive.

A ‘Cyberpunk 2077’ Game Of The Year Edition is coming