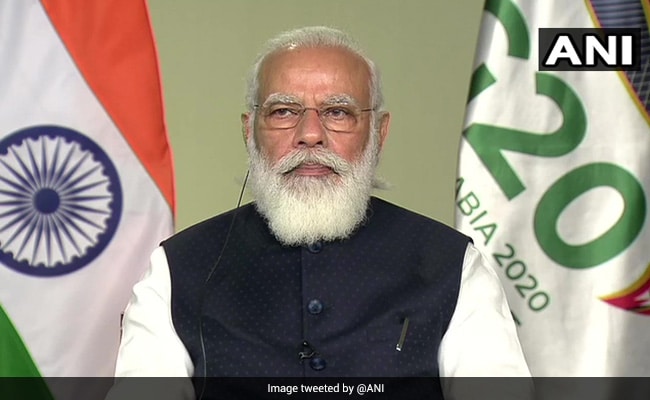 “The biggest challenge of COVID-19 since World War II”: PM Modi at the G20 summit

Calling the COVID-19 pandemic an important turning point in human history and the biggest challenge the world has faced since World War II, Prime Minister Narendra Modi on Saturday called at the G20 summit for a new global index based on talent, technology and transparency and tutelage to the planet in the post-corona world.

PM Modi also said “Work from anywhere” is a new standard in the post-COVID world and suggested creating a virtual G20 secretariat as a monitoring and documentation repository.

King Salman of Saudi Arabia opened the Group of 20 summit as the coronavirus pandemic eclipsed this year’s meeting of heads of state which is being held in virtual format. India is expected to host the G20 summit in 2022.

“We had a very fruitful discussion with the G20 leaders. The coordinated efforts of the world’s largest economies will surely lead to a faster recovery from this pandemic. Thanked Saudi Arabia for hosting the virtual summit,” tweeted Prime Minister Modi.

At the G20 summit, Prime Minister Modi said he had put forward the need to develop a new global index based on talent, technology, transparency and stewardship to the planet.

Versatility and retraining to create a talent pool will enhance the dignity and resilience of workers, he said, adding that the value of new technologies should be measured by their benefits to humanity.

“Transparency in our processes helps inspire our societies to fight crises collectively and with confidence. The spirit of guardianship towards planet Earth will inspire us for a healthy and holistic lifestyle,” he said in a statement. series of tweets.

The Department of External Affairs (MEA), in a statement on Modi’s participation in the G20, said the prime minister called the COVID-19 pandemic a major turning point in human history and the greatest challenge facing the world since World War II.

He called for decisive action by the G20, not limited to economic recovery, jobs and trade, but focusing on the preservation of planet Earth, noting that “we are all trustees of the future of the world. ‘humanity”.

The Prime Minister called for a new global index for the post-corona world that includes four key elements – creating a large talent pool, ensuring that technology reaches all segments of society, transparency of systems of governance and treating Mother Earth with a spirit of guardianship, according to the MEA.

On this basis, the G20 can lay the foundations for a new world, he said.

At the G20 summit, the Prime Minister called for greater transparency in governance systems, which he said “will inspire our citizens to take up common challenges and build their confidence.”

PM Modi also offered India’s computing prowess to further develop the digital facilities for the efficient functioning of the G20.

The Prime Minister stressed that in recent decades, although the focus has been on capital and finance, the time has come to focus on versatility and re-qualification to create a vast pool of human talent.

This would not only enhance the dignity of citizens, but make citizens more resilient in the face of crises, Prime Minister Modi said.

He also said that any assessment of a new technology should be based on its impact on ease of living and quality of life.

The summit saw the participation of the respective heads of state or government from 19 member countries, the European Union, other invited countries and international organizations.

Prime Minister Modi congratulated Saudi Arabia and its leaders for its successful presidency of the G20 this year and for hosting the second G20 summit in 2020 via a virtual format despite the challenges and obstacles posed by the COVID-19 pandemic .

The summit under the Saudi presidency focused on the theme “Realizing the opportunities of the 21st century for all”.

The summit’s agenda is spread over two days with two sessions focused on resolving the pandemic, recovering the economy and restoring jobs, and building an inclusive, sustainable and resilient future.

“We are drowning”: Covid breaks flooded hospitals in the heart of America

The Bharat Express News - November 25, 2020 0
Deborra-Lee Furness teams up with artist to auction painting for charity -...

How to get unclaimed insurance payments