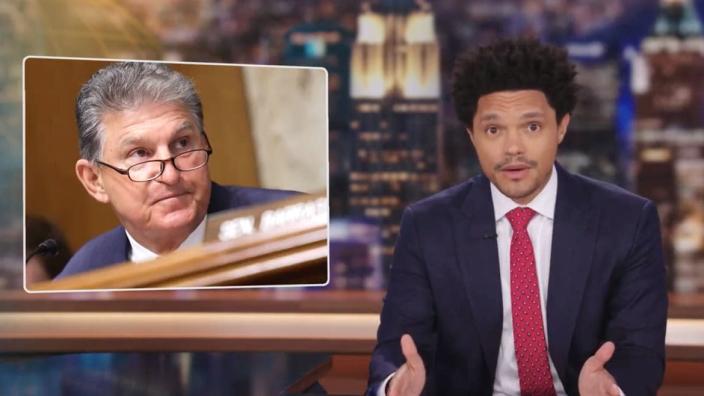 Trevor Noah isn’t quite ready to break out the champagne and celebrate the Senate Democrats’ unexpected deal on climate and tax reforms.

“I can not believe it”, The daily show said host Wednesday night after sharing the big news from Washington. ‘Has Joe Manchin decided to vote in favor of a bill? Which means the Democrats might get something done? Am I dreaming? And if so, what a boring dream!”

“And also, what a week for Joe Biden!” he added. “First he beat COVID, then he beat low expectations.”

The host went on to say he thinks these new developments have taught us all an “important lesson”, explaining: “Everyone was so mad at Joe Manchin, called him names, let their anger take over, wrote him off as a villain … and it worked, well done everyone.”

Noah admitted that even if the so-called Inflation Reduction Act isn’t everything progressives, and even Biden, wanted, it’s still a “pretty big deal” and potentially a “huge win for Democrats.”

ALSO READ  Trump has become highly suspicious of being monitored and that those close to him may be wearing wires: report

“But remember, of course, this is the Democratic Party,” he added. “So there are still plenty of ways to make this fall apart. House Democrats could oppose it. Kyrsten Sinema could act against it. Joe Manchin could come out tomorrow and out of habit oppose the bill.

Even if it is eventually passed, Noah concluded by saying, “This could be the legislative victory the Democrats need to drive into the midterms and lose the House by only 200 seats!”