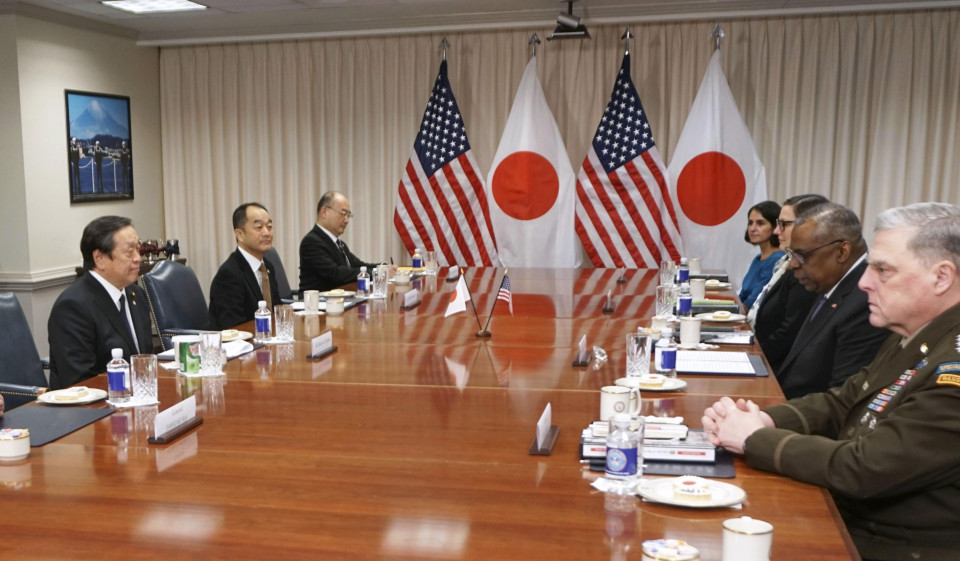 The defense ministers of Japan and the United States agreed on Thursday to start “intensive discussions” about the division of roles in the bilateral alliance after Tokyo gained the ability to attack enemy bases.

During their meeting at the Pentagon, Japanese Defense Minister Yasukazu Hamada and his US counterpart Lloyd Austin also signed agreements to accelerate cooperation in the development of military equipment and new technologies and secure defense supply chains, according to both governments.

Hamada and Austin agreed to “immediately hold intensive discussions on the alliance’s roles and missions,” based on the fundamental strengthening of Japan’s defense capabilities and the “effective operation of counterattack capabilities,” according to Japan’s defense ministry.

Japan’s acquisition of such capabilities could change the countries’ long-standing division of roles, with Washington serving as an offensive “spear” and Tokyo as a “shield” to repel attacks.

The talks also came a day after a “two-plus-two” security meeting in Washington involving the countries’ foreign and defense ministers, where they agreed that China’s growing military influence is “the biggest strategic challenge represents” in the Indo-Pacific region. and promised to strengthen deterrence.

On Friday, Wang Wenbin, the spokesman for China’s foreign ministry, came out firmly against the two-plus-two meeting’s joint statement, saying it is “full of Cold War zero-sum thinking and baseless defamation attacks on China.”

Wang claimed at a press conference in Beijing that Japan and the United States say they want to maintain a rules-based international order, but “willfully flout international law and basic standards of international relations and grossly interfere in the internal affairs of other countries”. .”

These actions have become “a real challenge to regional peace, security and stability,” he said.

“I expect active discussions at tomorrow’s summit so that the solid alliance between Japan and the US will be further strengthened under the strong leadership” of Kishida and Biden, Hamada told reporters after his talks with Austin.

Austin told Hamada that Washington is concerned about Beijing’s “coercive behavior in the Taiwan Strait and waters around Japan,” as well as North Korea’s missile and nuclear threats, according to the US Department of Defense.

To develop counter-attacks, Japan has decided to purchase long-range Tomahawk cruise missiles from the United States until it can deploy domestically developed missiles.

But Hamada and Austin did not discuss the matter, a Japanese government official said.